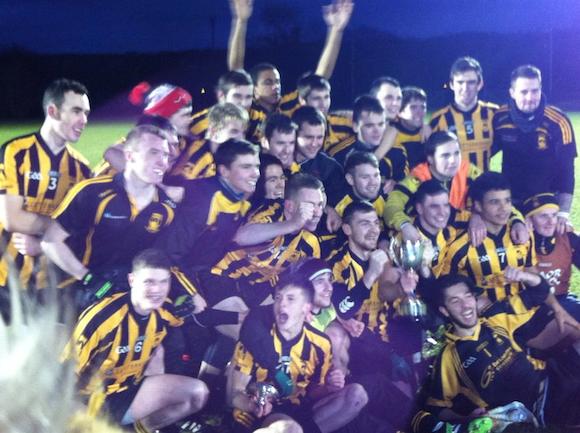 Star-studded Kilcar were odds-on favourites to win the title.

And with eight minutes left, they were seven points to the good and thought they had both hands on the trophy.

But they hadn’t counted on a remarkable comeback by the Letterkenny team – written off by all the local media before a ball was kicked.

St Eunan’s had slipped into the lead in the 17th minute when Darragh Mulgrew hit the back of the net, but five minutes later Kilcar netted themselves through Eoin McHugh.

Kilcar kept that lead and extended it to three, leading 1-09 to 1-06 at the break – but they weren’t out of sight.

McHugh scored two quick frees after the break before the brilliant Paddy McBrearty pointed again – his seventh of the day at that stage – to give Kilcar a six point advantage.

But St Eunan’s have their own handy marksman and Sean Hume pointed yet again from distance to narrow the gap – before hammering home a goal to level the game 2-10 to 1-13.

Sean Daffan was the hero in the Eunan’s goal as he pulled off a stunning save as McBrearty rifled home what looked like the winner. He had to settle instead for a point from the resulting 45, to take Kilcar a point clear.

But Michael Miller pointed straight away to tie the game again – 2-12 to 1-15 in injury time.

A couple of referee decisions – against Eunan’s players for over-carrying – led to frustration in the crowd.

But that soon turned to delight for the Letterkenny side at least as Sean Hume fired him another goal four minutes into injury time to complete a remarkable 3-12 to 1-15 victory.

HUME THE HERO AS ST EUNAN’S STUN FAVOURITES KILCAR TO WIN U21 TITLE was last modified: December 20th, 2014 by John2