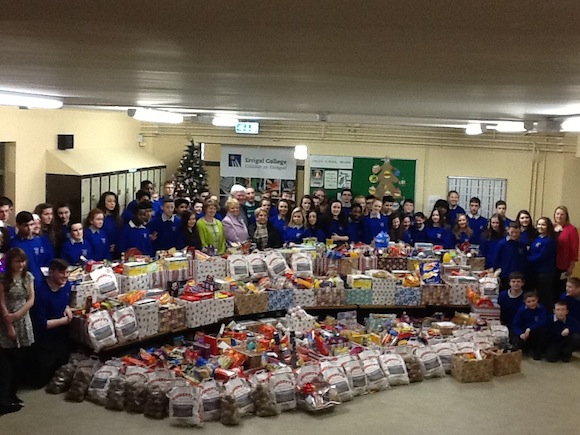 NOTHING ‘HAMPERS’ SCHOOL’S EFFORT TO BRING SOME MAGNIFICENT CHRISTMAS CHEER!

The stunning collection of hampers which were given to St Vincent de Paul.

There was just no way anything was going to ‘hamper’ one Letterkenny school’s effort to help those less well-off than themselves this Christmas.

Errigal College had set themsleves a target of compiling a whopping 100 hampersto present to the St Vincent de Paul at the schools annual Christmas Carols service.

The school who is celebrating their centenary year had set a target of collecting a hamper for each year.

But nobody could have thought they would collect enough for a staggering 130 such hampers.

Speaking at the presentation of the hampers, school Principal Charlie Cannon acknowledged the support of the local community.

H also thank local businesses for assisting them in exceeding their target.