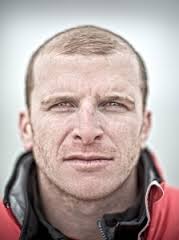 DONEGAL HERO TO GET GLOBAL AWARD FOR DARING PACIFIC RESCUE

The Cruising Club of America (CCA) has confirmed that its 2014 Rod Stephens Trophy for Outstanding Seamanship will be awarded to Sean McCarter, skipper of the Clipper 2013-14 Round the World Yacht Race Northern Irish entry Derry-Londonderry-Doire.

The award is in recognition of the way he directed his crew during a dramatic man overboard rescue in the harsh northern Pacific Ocean last March.

The Rod Stephens Trophy for Outstanding Seamanship is an internationally renowned trophy awarded annually for an act of seamanship which significantly contributes to the safety of a yacht, or one or more individuals at sea.

A former Royal National Lifeboat Institution volunteer, Sean says: “The CCA is a club that has over 85 years of promoting the adventurous use of the sea and puts a premium on safety and seamanship.

“I am honoured to have been selected to receive The Rod Stephens trophy for Outstanding Seamanship but must accept it on behalf of the entire crew of Derry-Londonderry-Doire on the Pacific leg. Finding and rescuing Andrew Taylor in the midst of a North Pacific gale was not down to one person but to the skill and determination of a well-trained team.”

Crew member Andrew Taylor, 46, from London, went overboard in the middle of a Pacific Ocean storm, approximately half way through the 5,600 mile race from Qingdao, China to San Francisco, USA at the end of March this year whilst competing in the Clipper 2013-14 Race. He was recovered after 90 minutes in the water. The search was particularly difficult due to low visibility, high winds and mountainous seas which caused Andrew to drift quickly out of sight from the yacht.

Andrew made a full recovery after initial shock, hypothermia and a badly bruised leg. He continued the remaining six races to complete the circumnavigation when the Clipper Race returned to London in July 2014.

Clipper Race chairman and founder, Sir Robin Knox-Johnston says: “The recognition of Sean McCarter’s leadership and motivation by the Cruising Club of America’s prestigious Outstanding Seamanship Award during the recovery of Andrew Taylor from the Derry~Londonderry~Doire yacht during the passage across the North Pacific Ocean will be welcomed by many.

“Andrew fell overside in strong winds and heavy seas during the race from Qingdao to San Francisco. Sean’s determination to recover Andrew motivated the crew and it is fair to say that had Sean not shown outstanding leadership Andrew might not be with us today.”

Derry has been represented in the Clipper Race since 2011 and finished in fourth position at the end of the last edition earlier this year.

In the past, the Rod Stephens trophy has been awarded for diverse acts of seamanship such as the rescue of 51 Haitians by the captain and crew of Corwith Cramer, a Brigantine sail training ship. In 2007 it was awarded to Mike Golding for his rescue of Alex Thomson during the 2006 Velux Ocean race when Thomson’s boat Hugo Boss was sinking.

The award will be presented during the Annual Awards Dinner of the Cruising Club of America at the New York Yacht Club in Manhattan on 6 March, 2015.

Sean McCarter and his crew were also recently nominated for Yachts and Yachting Magazine Achievement of the Year Award. Winners will be announced in February.