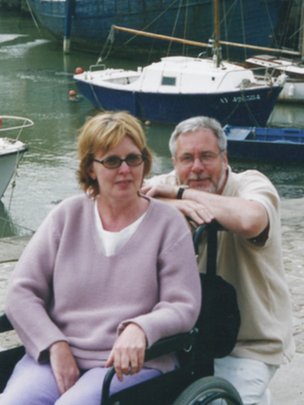 The partner of brave Donegal right-to-die campaigner Marie Fleming says he has no regrets about supporting her wishes.

The late Marie Fleming with her partner Tom.

But Tom Curran admitted that he is going to have such a lonely Christmas without the Lifford-born woman he shared his life with.

He said he tried to keep busy to block out the feelings of grief.

But he admitted “But it doesn’t work, that was my coping mechanism. Today I miss Marie very much.”

He said he is now looking forward to spending Christmas with her daughter Corrina and five grandchildren, as well as his own son, David.

“They will keep me busy and stop m feeling sorry for myself,” he said.

He added that h takes so much pride form the campaign himself and Marie mounted.

“I think back to when the news broke first that I was willing to help Marie. I got a call from the guards to tell me they were going to question me.

“That wouldn’t happen now. I don’t think we would have progressed that much without Marie,” he added.

PARTNER OF DONEGAL CAMPAIGNER MARIE SAYS HE WILL MISS HER SO MUCH THIS CHRISTMAS was last modified: December 21st, 2014 by Stephen Maguire