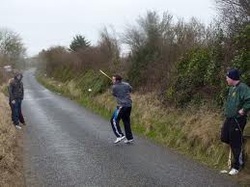 Road Hurling can best be described as a hurling form of road bowls. Teams compete over a distance of 5km. Each team comprises three members; including one adult. Each player takes a turn to hit the sliotar with the hurley.

The skill is to keep the ball low on the ground, avoiding hedgerows and ditches, to gain as much distance as possible per shot. Each team uses three slíotars and if they lose them, that team is eliminated. The winning team will be the first to complete the circuit with the fewest pucks.

It’s an imperfect description, but think of a compromise between hurling and golf. Using a hurl and sliotar, competitors must get to the end of the course with low strokes – it’s down the road, but sometimes it goes a little cross-country.

Contestants play in teams of three. Each team is given three specially-marked sliotars. If you lose a ball, it’s a three-stroke penalty. Two teams head off together, each marking each other’s score card. The next two teams head off after the first teams are out of distance… just like golf! The members of the team take it in rotation to strike the sliotar and one of the team should go ahead and keep an eye out where the sliotar lands.

The route begins at the crossroads at Ard Rí pub, and heads towards the Kirkstown road, which eventually heads back towards O’Donnell Park.

Brute strength may help but will not be the winning attribute as tactics will be essential. You can try and go for distance; you can bounce it off a ditch, you can try to cut corners, or you can be cautious and not lose any sliotars!

It should take the teams just over an hour and a half to get around the course. It is not overly strenuous as its mainly downhill but it does require some basic fitness.

The Big Event takes place this Saturday, Dec. 27th and entrance fee is €10 per adult and all juveniles are €5 each, with all money raised going towards the club. It’ll be a great family day out and maybe in the future there could even be a road hurling championship between a few clubs.

Registration is at 11.30am at O’Donnell Park. The event starts at noon.