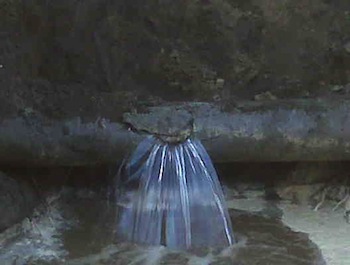 JUST 380 OF 900 WATER LEAKS ACROSS DONEGAL FIXED THIS YEAR

Irish Water has managed to fix just 380 of the 900 leaks targeted across Co Donegal this year.

A huge amount of leaks across Donegal have still not been fixed.

The figures are part of an overall countrywide breakdown found by an RTE investigation.

Outside centres of major urban population like Dublin, Cork and Limerick, Donegal has one of the highest amounts of unfixed leaks.

The disclosure comes as it was revealed that investment by Irish Water in infrastructure this year is set to be significantly lower than the average annual spend by Government over the previous ten years.

Documents show the company’s capital spend on infrastructure up to November this year was €300m.

Other documents show Irish Water is on course to fix the same number of leaks this year as were repaired last year.

However plans to fix leaks in Co Donegal is considerably down.

This is despite a massive water meter installation programme that the company said would help it to find leaks.

However, the last two years has seen the lowest level of investment in water services since 1998.

In the first 11 months of this year, Irish Water spent just under €300m.

On leaks, the company has predicted that installing water meters will help it to pinpoint where water is being lost.

However, despite installing half 500,000 meters, it is on course to repair around the same number of leaks as last year, at just over 26,000.

The company said it had made significant progress identifying and fixing some major water leaks and its capital spend will be €340m by the end of this year.