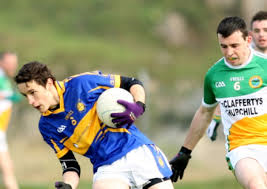 Eoin McHugh has been named in Rory Gallagher’s 27-man squad for the Dr McKenna Cup.

Donegal manager Rory Gallagher has introduced a raft of new players in to his squad for the forthcoming Dr McKenna Cup competition which gets underway in a fortnight.

Gallagher run the rule over thirty club players during an intense month of trials which have seen him unearth new Donegal players.

McHugh has been tipped to follow in the footsteps of his cousins Ryan and Mark and make a big impact at inter-county level.

Former UCD goalkeeper Marc Anthony McGinley has also been called up into the squad for the series of games against Derry, Queen’s University and Fermanagh.

Dungloe star Cory Gallagher has also been named in the squad, he played in the Dr McKenna Cup competition in 2013 before being axed from the squad for that season’s League and Championship campaigns.

The competition begins with a trip to face Derry at Celtic Park on January 4th.