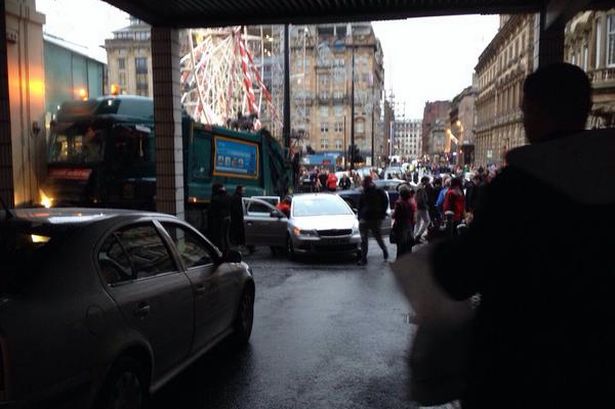 SIX PEOPLE are feared dead after being hit by a bin lorry in Glasgow this afternoon.

The accident happened outside the Millennium Hotel, next to Queen Street Station in George Square. Seven other people have been hurt, some critically.

Eyewitnesses said the vehicle ploughed into a crowd waiting to cross the busy road.

Police say it then mounted the pavement where it hit a pedestrian before travelling up Queen Street towards the station, travelling 300 metres, according to Police Scotland Superintendent Stuart Carroll.

Police confirmed there had been “a number of fatalities” and seven people seriously injured – a figure that could rise.

A force spokeswoman said: “About 1430 hours today, Monday 22 December, a Glasgow City Council bin lorry was travelling north on Queen Street when it appeared to strike pedestrians outside the Gallery of Modern Art (GOMA) before continuing to travel towards George Square, when it crashed at the Millennium Hotel on Queen Street at George Square.

“There have been a number of fatalities and people injured. Emergency services are currently at the scene.

“Police have declared the scene a major incident.

“All roads in the surrounding area are closed and people are advised to stay away from George Square and make alternative travel arrangements.”

SIX PEOPLE FEARED DEAD AFTER BEING HIT BY BIN LORRY IN GLASGOW was last modified: December 22nd, 2014 by John2