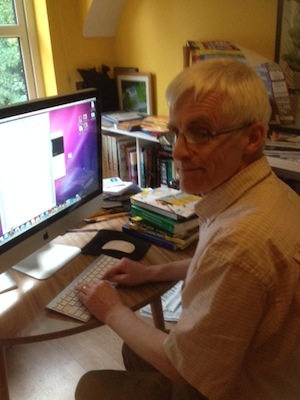 A SPORTING GIANT SLIPS AWAY

The late Neil Cullen – a huge sporting icon in Donegal.

The big man’s gone. And given the time of year it was almost appropriate that Neil Cullen left us when so many young budding athletes over the years had invariably likened him to Santa Claus though, in truth, no time is appropriate to lose someone of his stature.

His coaching abilities helped propel many of those athletes along the track and not just Letterkenny but the entire North-West will have reason to mourn his passing. Both sport and life in general are the poorer this week as we reflect on a lifetime of selfless dedication to his beloved athletics including the Sportshall events which he took particular charge of and, previously, football where he was involved with Finn Harps.

That familiar bearded figure strode onto many a sporting arena over the decades and you always knew he was there. Not just because of that loudhailer voice that boomed out instructions and advice but also because of a presence that few could match.

And that sense of humour. There was no trip made with Neil that didn’t pass without a series of belly laughs – both his and those travelling with him. For while the competitive edge was invariably a big part of his personality, ensuring the athletes in his charge were enjoying themselves was equally important to him.

And even during his illness he still retained that comical approach, reflected, I have no doubt, in his dealings with hospital staff and those who cared for, and treated, him since he was initially diagnosed.

His wake at his home in Ballyraine Park prompted countless stories and one of my own favourite recounts the time he led a group of juvenile athletes to a meeting in Nenagh. Afraid his young charges would venture out to sample the night life of the Tipperary town and be below par for performing the next day, he camped himself outside the dormitory door. Anybody attempting to slip out during the night will have to pass me, he warned.

A couple of hours into the night a voice inside the room whispered: “Paul, I’ll give you a pound if you check if he’s still there.”

Taking courage into his hands and hoping that would be followed by the money, the said Paul gently opened the door to carry out the spot check only for the familiar tones outside to proclaim: “You can give him the pound now!”.

There are many other stories like this one, all of them reflecting that gigantic sense of mischief.

We’ll not see him pottering about at the garden shed behind his home anymore and the Friday evening regulars in the Pin Tavern pub across the road are now shorn off his compelling company and athletics, and specifically Letterkenny A.C., has lost its figurehead.

But, of course, the real loss is to his family, his wife Margaret and daughters, Grainne, Siobhan and Mairead, along with his siblings and other family members, to whom we can only extend our sincerest sympathy.

The big man’s gone but he’s left behind a legacy that must surely be – even if he himself modestly waved away any tributes paid to him at the various presentation functions he attended – marked with some physical memorial in his honour.

No real surprise that Rory McIlroy scooped the Sports Star of the Year award at the R.T.E. presentation night at the weekend even if those of us in the North-West were rooting for Mark English or Seamus Coleman to take the honours.

Unlike the B.B.C. awards ceremony the previous week, this WAS a proper sporting occasion and, also unlike the Beeb’s event, the right man did in the end bring home the big prize with Lewis Hamilton not, of course, in the starting grid for the R.T.E. affair.

In another year, Letterkenny’s European bronze medal winner might have been presented with the ultimate honour but when you’ve lifted two Majors and helped in the Ryder Cup success then it’s hard to argue with this year’s awardee.

As was the case with all the nominees, Mark English featured in a special pre-produced segment and the one line that jumped out from his own words was the one he repeated to himself as he neared the finishing line in that memorable European Championship 800 metres Final. “As long as it’s not fourth, as long as it’s not fourth….”. It could so easily have been second but the wide grin at the end told that the bronze medal position was more than good enough for the former Letterkenny A.C. member.

Seamus Coleman, too, has enjoyed an encouraging year in both the Everton and Republic of Ireland shirt and recalled, in his sixty second slot, growing up and wanting to emulate the likes of Damian Duff and Robbie Keane. The Killybegs man has done that and more and Republic boss, Martin O’Neill, among the attendance at Sunday night’s awards ceremony, heaped praise on the full-back and spoke of his importance to the Irish set-up.

One sporting personality marked absent from the R.T.E. ceremony was Katie Taylor who, this week, aimed a couple of hard-hitting jabs at the national broadcaster for its failure to cover women’s boxing and the amateur game in general outside the Olympics.

“Last year when the lads’ European Championships were on, they (R.T.E.) filmed the semi-finals and the finals but when mine came along they were nowhere to be seen. They always want to want to jump on the bandwagon when the Olympics come around every four years but that’s not good enough.

“We should be getting the support of the national broadcaster. What more do I actually have to do to get that coverage?,” Taylor demanded.

Naturally, R.T.E. came out of their corner quickly to defend their coverage of the five times world champion insisting that they had consistently supported the Bray boxer in televising her fights.

Taylor refused to attend the awards night last weekend but probably should have been advised better in this respect. Show up and then show R.T.E. up would have been her best move.

Anyway, R.T.E.’s sporting coverage has been generally good this year but TG4 should still take the overall award for promoting a wide variety of top level events throughout 2014.

As for TV3, they’d probably need Kim Kardasian to undertake the role of ring girl before they’d even consider showing a Katie Taylor fight.

SACK RODGERS AND THE HARPS BOARD?

‘Would you buy a second hand car from the current Liverpool manager?,” the question was posed on one of those comment lines on R.T.E that followed a report on a recent match involving the Anfielders.

Well, no, in the answer because (a) how could you trust anyone who went and bought Mario Balotelli, and (b) I’d probably have some difficulty in driving it.

But that’s not the reason I’m referring to this. What caught my eye was the tag name on the comment – ‘Sack the Harps Board’.

Okay, who’s behind this and why? Personally, I’d buy a second hand car from the Harps board quicker than I would from the ‘Pool boss.

After all there he was branding Arsenal’s Alexis Sanchez a “diver” in an incident which resulted in the free-kick that led to the Gunners’ opening goal in Sunday’s 2-2 draw but, apparently, completely overlooking a blatant hand ball by Raheem Sterling in the opposition penalty area which almost helped Liverpool to a goal of their own.

And, yet, I have a lot of admiration for Brendan Rodgers. Last season his Liverpool team played the best football in the Premiership and broke the 100 goal mark in doing so. And for a rival red that was very difficult to write.

Hardly had the ink dried on the McGettigan Group agreeing to sponsor Finn Harps F.C. again in the coming season – okay it was slow-drying ink – than the surprise announcement came that the Donegal company has gone and purchased a majority shareholding in Bray Wanderers.

Owners of the Royal Hotel in the County Wicklow town – among a couple of other establishments in and around Dublin – the McGettigans will be a major backer to a club that continues to occupy Premier Division status despite a comparatively low support base and the hardship of securing top quality playing personnel given their close proximity to Shamrock Rovers, Shelbourne, Bohemians and St. Patrick’s Athletic.

The club will now be in a position to avail of facilities at the hotel and, indeed, other McGettigan outlets in addition to enjoying other benefits.

Credit to the family group for giving this shot in the arm to the League of Ireland and to one of its lesser lights.

Could there be a similar takeover with respect to a club much closer to the McGettigan roots?

He’s back! Keano, that is. Or, more specifically, I Keano, returning to a stage near you – that is, if you live in the Dublin area – in March.

Saw this production a couple of years ago in the capital with Letterkenny’s very own Dessie Gallagher starring in the role of Macartacus or Mick McCarthy to give him his Irish handle. Great show and great performance by our Dessie who got Mick’s accent’s to perfection.

Other characters – who will need no introduction – in the comedy play include Dunphia, Quinness, and Packie Bonnerus.

Sample lines: Keano: “If you fail to plan, then you’re planning to fail.”

Packie Bonnerus: “But if you plan to fail and you do fail then surely you have succeeded.”

It’s running from March 28th to April 12th in the Olympia Theatre. Well worth a trip to see it. And it saves you bother having to trawl through the Keane autobiography.

Amateur boxing has honoured Finn Valley B.C.’s Michael Gallagher and a thoroughly deserved tribute it is. Last August, the boxer took home a bronze medal from the Youth Olympic Games in China and at their annual awards night,, the heavyweight was landed with the Olympic Achiever award by the Amateur Boxing Association.

Sporting talent never seems to sit on its laurels in this county.

Finally, to the readers of this column – both of you – have a sporting Christmas even if the turkey won’t be getting into too much of a flap over it…

REMEMBERING THE BIG MAN AND SACKING THE HARPS BOARD – IT’S WALSHY ON WEDNSDAY was last modified: December 24th, 2014 by Stephen Maguire