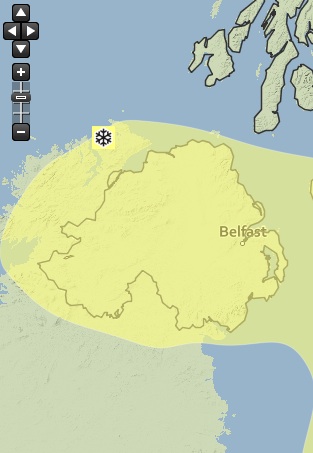 Breaking News: MET EIREANN has issued a snow and ice warning for Donegal.

“Heavy rain will turn to sleet and on higher ground to snow with the risk of snow on lower levels in the afternoon and evening,” said a Met Eireann spokesman.

Temperatures will fall overnight to -4C in many inland areas of Donegal, turning wet roads into icy stretches.

Gardaí are asking motorists to slow down and drive with caution.

The warning for snow and ice applies from 8am on St Stephen’s Day until 9pm. Any snow is expected to clear overnight into Saturday.

Earlier the UK Met Office included Donegal in its Yellow Warning map for snow and ice.

“There remains much more uncertainty than average regarding the track of this depression which in turn leads to uncertainty about the location of the heaviest precipitation and how much snow there will be. Where snow does occur accumulations of 2 to 4 cm are likely even to lower levels and in excess of 10 cm possible,” said a spokesman.