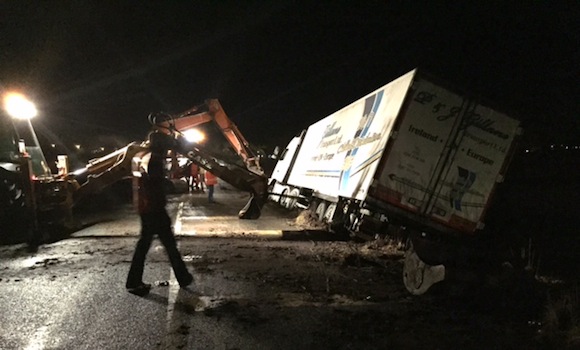 The truck operation is underway tonight.

A massive recovery operation is underway to bring a stranded lorry back onto the road in West Donegal this evening.

The driver of the articulated truck was lucky to escape serious injury after it left the road in icy conditions at Crónasealg just outside Dungloe.

It is understood the truck had been traveling from Galway and was due to make a delivery to the LIDL store in Dungloe.

One woman had complained that it took the emergency services more than half an hour to respond to the call after she made a phonecall.

A number of vehicles are involved in this evening’s recovery operation.

However it has resulted in serious traffic confusion due to ongoing diversions in the area.

It is hoped the operation will be completed tonight and the road will be reopened again fully.

Meanwhile Met Eireann has again issued a roads warning with temperatures due to plunge again tonight.

It is expected that temperatures across Donegal will be minus 4 degrees and even minus 6 in places.