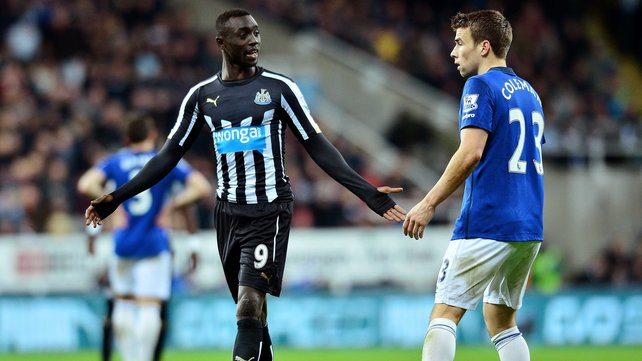 EVERTON manager Roberto Martinez has insisted that Newcastle striker Papiss Cisse should have been sent off for an “unacceptable” elbow on Seamus Coleman in his side’s 3-2 loss on Tyneside today.

The Donegal man went to ground after clashing with the Senegal frontman on the half-hour of the Barclays Premier League match at St James’ Park, and replays suggested the latter was fortunate to survive as referee Craig Pawson took no action.

Martinez’s frustration was compounded four minutes later when Cisse cancelled out Arouna Kone’s opener to set up the home side to end a run of four successive defeats with a 3-2 victory.

Asked if the goalscorer should still have been on the pitch at that point, the Toffees boss said: “No, no, he shouldn’t.

“One thing is the performance of the two sides; the other is the big moments like that elbow. I don’t want to see players sent off for different rules or the laws of the game, but it is unacceptable, that action from Papiss Cisse.

“You don’t want to see that on a football pitch, that shouldn’t be allowed. Two players fighting for their position at a dead-ball situation and you end up deciding to take the law [into your own hands] by elbowing a fellow professional, it’s unacceptable and that should have been a red card.

“That’s got nothing to do with the result – obviously it’s different to play against 10 men than it is to play against 11 men, but actions like that shouldn’t be allowed to be on a football pitch.”

Cisse seems certain to face action over the incident, but Martinez admitted his surprise that it had not been spotted at the time.

He said: “I am surprised. When you see it on the replay, there is no intention of the player to hide it. It’s just he wants to take the law into his own will and he reacts in a manner that is very, very hard to justify.

“I don’t know how. I know it’s difficult, but the action was well open and that should have been spotted.”

Earlier Coleman’s lovely first half cross allowed Arouna Kone to nip in to score his first goal for the club.

NEWCASTLE STRIKER SHOULD HAVE BEEN SENT OFF FOR ELBOW ON COLEMAN – MARTINEZ was last modified: December 28th, 2014 by John2