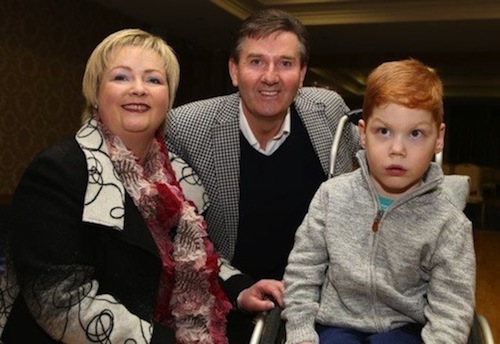 Daniel O’Donnell last night put his Christmas holidays on hold to come to the aid of a young boy whose dream it is to walk.

The singer, who has completed downscaled his tour schedule to spend more time with wife Majella, said he couldn’t say no to little Paul Doherty and played a charity concert for him.

Paul, from Killygordon, was born with spastic quadriplegic cerebral palsy which left him in a wheelchair.

But his mother Ann-Marie never gave up hope of him walking one day and now Paul will have an operation in March 2015.

While the operation does not guarantee the five year old lad will take his first steps, his mum is determined he gets a chance.

Amazingly Ann-Marie has now come up with the cash and thousands of euro raised from last night’s concert by Daniel, will help fund Paul’s months of rehabilitation.

Daniel met up with Paul and his mum before last night’s concert at the Villa Rose Hotel in Ballybofey.

“We all know what a wonderful person Daniel is but when he agreed to do a concert for Paul I was just gobsmacked. We have worked so hard to get he money for Paul’s operation but the concert was just the icing on the cake.

“We had a lovely chat with Daniel before the concert and h is just such a nice person. He’s so busy and for him to give up a night of his Christmas holidays says what kind of a man he is,” said Anne Marie.

Paul and his family will travel to America in March where he will have his operation.

The procedure, called Selective Dorsal Rhizotomy (SDR), involves cutting some of the nerves in Paul’s spinal cord that are misfiring the muscles in his leg

Anne Marie explained “Since Paul could talk he always told me “Mammy, I want to walk”. It broke my heart to see him stuck in a wheelchair not been able to run about with his brother and sister or even to be able to pick up a toy from the floor that he wanted to play with.

“Now we’re on the verge of making his dream come true. To see him being able to walk into school rather than being pushed in his wheelchair is all we have ever wanted,” she said.