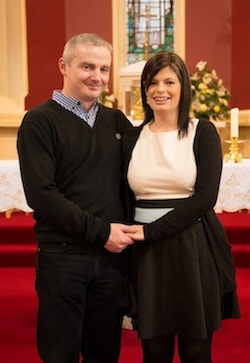 MAN KILLED IN CRASH WAS ONLY MARRIED RECENTLY

The young man killed in last night’s car crash in Gortahork had only been married a few months.

The 39 year old, who has been named locally as James Gallagher from Curransport, died following the incident around 9pm.

Mr Gallagher, who was wed fiancee Yvonne in June, died after his car struck a pole at Curransport close to his home.

The couple have one daughter Lilly-May.

No other car was involved in the collision.

Conditions at the time were treacherous with a heavy frost warning and temperatures dipping below freezing.

Mr Gallagher was pronounced dead at the scene and his remains were taken to Letterkenny General Hospital where a full post mortem is expected to take place.

Garda crash scene investigators are at the scene of last night’s crash in an attempt to discover the cause of the tragic smash.

The road is closed and local diversions are in place.

Gardaí are appealing for witnesses to contact Milford Garda Station on 074-9153060, the Garda confidential telephone line 1800-666-111 or any Garda station.

MAN KILLED IN CRASH WAS ONLY MARRIED RECENTLY was last modified: December 30th, 2014 by Stephen Maguire