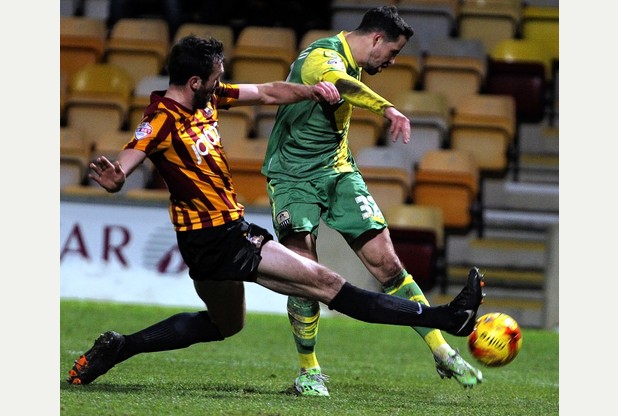 NOTTS COUNTY KEEN TO HOLD ON TO WINGER McLAUGHLIN

NOTTS COUNTY manager Shaun Derry wants Stephen McLaughlin back at the club in January and revealed talks have already begun with Forest over the Donegal man’s future.

The former Clonmany Shamrocks, Finn Harps and Derry City winger played the last game of his loan spell in the 1-0 defeat at Bradford City on Sunday as the Magpies’ unbeaten away record in League One was brought to a halt.

McLaughlin has excelled during his stint on loan at County, which has seen him become the club’s leading creator with seven assists.

And the importance of the 24-year-old’s contribution has not gone unrecognised by Derry, although he admits McLaughlin’s destination is out of his control.

“What Stephen has delivered for us during his time here has been excellent and I would like to keep him,” he said.

“The conversations with Forest have already taken place but they have their own agendas to consider.

“They’ve had a loss to Birmingham which will hurt them and their season has tailed off in recent weeks.

“Stuart will want to get his troops back on fire like they were at the start of the season.

“At this moment in time, we are not too sure whether Stephen fits into their jigsaw.”

NOTTS COUNTY KEEN TO HOLD ON TO WINGER McLAUGHLIN was last modified: December 31st, 2014 by John2

Scott Huey – the Donegal-born bowler who...