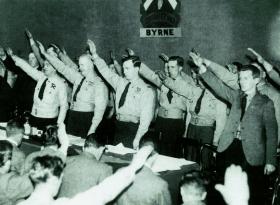 THE foreign affairs minister Charlie Flanagan has apologised for a foul-mouthed outburst on Twitter directed at Sinn Fein.

Donegal TD Pádriag MacLochlainn responded by attaching a picture to a tweet showing Blueshirts giving a fascist salute in the 1930s. The message on the tweet read “Hopefully cult politics doesn’t make a comeback.”

Another twitter user responded, “think it was a spelling mistake” to which Mr Flanagan replied: “Yep, left out the ‘n’ ”.

It was understood that it was intended as a half-joke or a smart comment to Mr MacLochlainn’s tweet and a string of provocative tweets from Sinn Féin supporters and others. However, his linking of the word ‘cult’ with the similar rude ‘c’ word, provoked a flurry of protest on Twitter that continued into New Year’s Day.