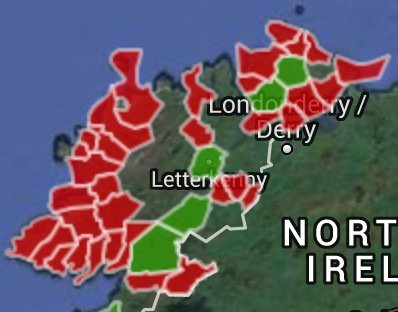 DONEGAL TO GET WIDESPREAD eFIBRE BROADBAND AS EARLY AS APRIL

Widespread broadband is to be installed across the majority of Donegal as early as April, Eircom has revealed.

The red parts of the map indicate the areas of Donegal which will get eFibre broadband between April and June while the green areas already have it.

The country’s biggest telephone provider has revealed on its website that more than thirty telephone exchanges locally can expect to have eFibre broadband available between April/June.

This will include a heavy concentration of telephone exchanges in South, West and North Donegal and in the Inishowen area. Parts of Letterkenny, Inishowen and Donegal Town are already eFibre enabled.

Some parts of Donegal cannot get regular broadband yet and many other exchanges have low output.

Some of the county’s exchanges have an ASDL2 system enabling current speeds of up to 24mb, whereas the exchanges that came on stream in the early broadband days have the older ASDL1 system with maximum download speeds of 8mb.

The introduction of eFibre will see these speeds increase to a maximum 100mb download depending on proximity to an exchange or eFibre cabinet.

Eircom’s latest interactive map shows a work schedule where the 34 Donegal exchanges can expect eFibre work to be completed between April and June of this year.

Although unconfirmed, the map seems to indicate that Tory island will come under the eFibre broadband from Falcarragh.

Meanwhile, Arranmore Island does not seem to be included in the upgrade according to the map, but bizarrely a check on Eircom’s website indicates that areas in Aphort and Leabgarrow on the island are eFibre enabled despite the island having no broadband availability.

The community of Arranmore has been campaigning for better internet access for some years now. The island’s telephone system is connected to an exchange on the mainland that cannot accommodate broadband.

In November last a London based islander said his plans to move his technology company to the island cannot happen because of the unavailability of broadband.

DONEGAL TO GET WIDESPREAD eFIBRE BROADBAND AS EARLY AS APRIL was last modified: January 2nd, 2015 by Stephen Maguire