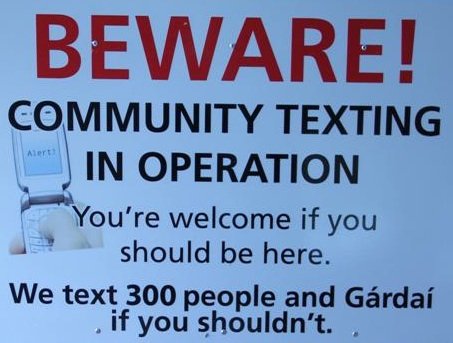 MORE THAN one million text messages alerting people to potential criminal activity in their local area have been sent under the Text Alert system, according to new figures from An Garda Síochána.

The figures also show that there are more than 100,000 people signed-up to the scheme from 550 groups in towns and villages across the country.

Fourteen schemes are operating in Donegal.

The Text Alert system was officially launched in September 2013 and is operated by An Garda Síochána with Muintir na Tíre, Neighbourhood Watch and the Irish Farmers Association (IFA).

What is Text Alert?

Text Alert enables communities to set up a Group to receive alerts advising them of suspicious or criminal activity in their area. As well as ensuring awareness among users of the service, it can also lead to them reporting suspicious activity to Gardai.

Sending the information by text means that it can be disseminated rapidly to a large amount of people in a cost-effective way.

Text Alert is a one-way system, and operates on the following principles:

• Member(s) of the public reports incident to the Gardaí (24 hour Garda District -Telephone number which is widely advertised).

• If the information is received by e-mail the Community Contact may forward the e-mail or convert the content to SMS Text and send to their Community Group.

An example of its effectiveness can be seen in a recent case of theft in Glenties:

A group of thieves targeted the town, raiding shops and homes. Alert members of the public got a registration number and reported it to gardai. Three people were later arrested.

Assistant Commissioner Jack Nolan said: “We have found that as an immediate, cost effective method of engagement with the communities we serve, Text Alert is invaluable. It would appear from these levels of usage the public also feel it is a valuable way to help prevent and tackle crime.”

Mr John Hogan, President of Muintir na Tíre remarked that: “The Community Text Alert programme, in partnership with An Garda Síochána has allowed communities to rapidly exchange information, and gives communities a say in policing in their own areas.”

Mr Eddie Downey, IFA President stressed the scheme’s importance in preventing rural crime. “The IFA continues to support Community Text Alert as a vital tool in preventing rural crime. We recognise the significant impact this service can have in supporting the safety of rural communities. IFA is working closely with An Garda Síochána to continue to roll out text alert initiatives across our branch structure and further strengthen our Community Text Alert network,” said Mr Downey.