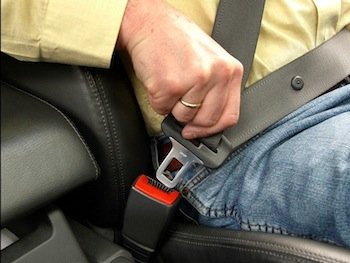 The head of the Garda Traffic Corps in Donegal has pleaded with people in the county to wear seatbelts in 2015.

Inspector Harrison has pleaded with people to belt up in 2015.

Inspector Michael Harrison said he has no doubt that less people would have been killed on the county’s roads last year if they had worn seatbelts.

Officially 11 people were killed on Donegal roads in 2014.

But Inspector Harrison confirmed that a number of those killed were NOT wearing seat belts.

A frustrated Inspector Harrison told Donegal Daily “I just can’t understand why, in this day and age, people do not wear seat belts.

“Seat belts save lives – it’s a proven fact and yet people across Donegal and across the country continue to ignore them,” he said.

And he added “I have no doubt that some of those eleven people killed on Donegal’s roads in 2014 would have still been alive if they had been wearing their seatbelts,” he said.

Inspector Harrison said both the Road Safety Authority and the Gardai are trying desperately to encourage people to wear seatbelts at all times.

“We are all completely frustrated as to why people are not wearing seatbelts.

“We are working on various campaigns and even Gay Byrne admitted his frustration at the situation of people not wearing belts.

“We simply have to try and continue to get the message across that people are much more likely to be seriously hurt or killed if they are not wearing a seatbelt and they are in a collision,” he said.