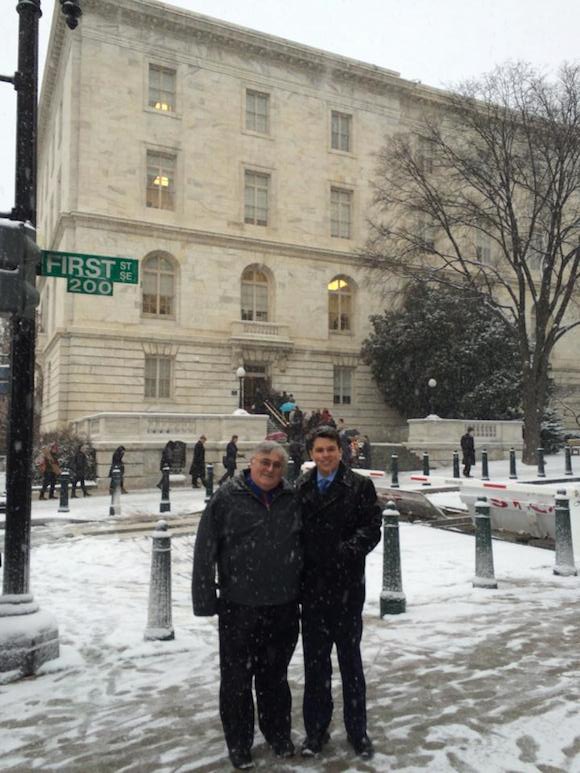 FROM GLENCOLMCILLE TO WASHINGTON, BRENDAN BOYLE TAKES DAD TO FIRST DAY IN CONGRESS!

Brendan and Frank Boyle in a snowy Washington this afternoon

Frank Boyle, (63), emigrated to America in 1970 aged just 19, leaving his beloved Glencolmcille behind.

This evening he is on Capitol Hill, Washington DC, as his son Brendan was sworn in as a Congressman in the House of Representatives.

Brendan is the only member of Congress with an Irish-born parent, after being elected to the House of Representatives in November’s US mid-term elections.

Recently Brendan told Donegal Daily of his love of Donegal, and Glencolmcille – or as he calls it The Glen!

Brendan told Donegal Daily: “I’ve been to Donegal many times. I think it’s one of the most beautiful places in the world. Of course, I guess I am a bit biased.

“My brother Kevin, who is also an elected official in the state House, decided to have his wedding in Donegal in 2011. It was a wonderful time.”

Brendan was elected to represent a mostly middle-class area with pockets of poverty spanning parts of Northeast Philadelphia and Montgomery County.

The 37-year-old advocates raising the minimum wage to help the working poor and increasing taxation of passive income such as stocks and bonds, noting that wage earners pay higher effective rates than investors

Brendan and Frank on a recent holiday home to The Glen

FROM GLENCOLMCILLE TO WASHINGTON, BRENDAN BOYLE TAKES DAD TO FIRST DAY IN CONGRESS! was last modified: January 6th, 2015 by John2