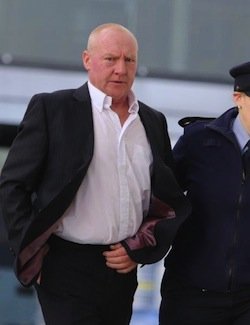 A 46 year old man has been charged in connection with an incident in which a man was injured in a shooting at the weekend.

PJ Friel who appeared in court this morning charged in connection with last weekend’s shooting in Glenswilly. Pic copyright of North West Newspix.

He was taken from Milford Garda station where he had been questioned since yesterday in connection with the attack.

The first is a Section 3 assault under the Non Fatal Offenses Against The Persons Act.

The second is that he did discharge a firearm being reckless as to whether any person was injured or not contrary to Sec 8 of the Firearms Offenses Weapons Act 1990.

Both offenses are alleged to have occurred at Ballynakillew on Saturday, January 3rd last.

Garda Sinead McHale said she arrested Mr Friel yesterday but he made no response when both charges were put to him.

Inspector Sheridan said she had no objection to bail but requested that bail conditions be put in place.

She requested that Mr Friel surrender his passport and that he sign on once a week on Saturdays at Milford Garda station between 9am and 9pm.

Mr Friel was also ordered to stay away from any witnesses in the case.

Inspector Sheridan said the Director of Public Prosecutions had already ruled on the direction of the case and asked for it to be adjourned until March 9th.