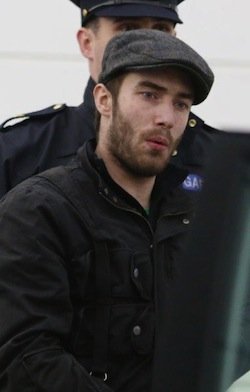 A victim of a brain tumour who led five Garda cars on a 50km pursuit has been jailed for six months.

Shaun Lynch led pursuing Gardai on the 30 minute chase during which he reached speeds of 100mph (160 kph) and careered onto the wrong side of the road several times.

The court heard he was stopped by Gardai at Manorcunningham but did a ‘diffing’ manouevre around them before escaping.

He was eventually stopped when a stinger device was deployed across a road which saw Lynch’s BMW car disabled in the village of St Johnston.

However Lynch and a passenger fled the scene before being caught by Gardai on December 14th last.

Solicitor for the accused, Mr Patsy Gallagher, said his client came from a good background and had never been in trouble before.

However he said he turned into a Jeckyl and Hyde character when he “got a steering wheel in his hands.”

Mr Gallagher also revealed that Lynch, of 50 Bellstraw Road, Strabane, Co Tyrone, had suffered a brain tumour when he was 18 years old.

“He had it operated upon and removed but he has six monthly checks.

“He lives in fear that it will come back and start again and I think this affects him a lot as he is on medication for depression.

“I appreciate he could have killed himself and other innocent parties but this was completely out of character for him,” said Mr Gallagher.

Judge Paul Kelly said it was rare that he sentenced people to prison for such offences.

But he added that it would be a dereliction of the court’s duty if this matter went unpunished.

“That type of driving is intolerable and it is a miracle that he is not facing more serious charges because someone was not injured,” said Judge Kelly.

He sentenced Lynch to six months in prison and also disqualified him from driving for six years.