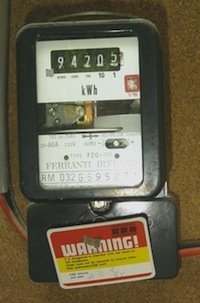 The owner of an Indian restaurant has been ordered to pay the ESB almost €4,000 when a worker had his eyebrows burned after a meter was tampered with.

A man was injured after the ESB meter was tampered with.

Bettina Adams, of the Spice of India restaurant in Milford, was charged with failing to stop the interference of a meter.

Letterkenny District Court heard how an electrical contractor received injuries after investigating a meter at the premises.

His eyebrows were burned after he encountered a flash while working at the meter on April 19th, 2013.

The ESB investigated the issue and found the meter had been tampered with and it was made safe.

Solicitor Patsy Gallagher said his client was not responsible for tampering with the meter but knew it had been interfered with.

He said the accused was only rented the premises and said it was not “a hive of activity.”

The court was told that the contractor had been lucky he had not been more seriously hurt.

Judge Paul Kelly said “This graphically illustrates the dangers of such operations.”

Judge Kelly also fined the woman €350 for failing to stop an interference with a meter.