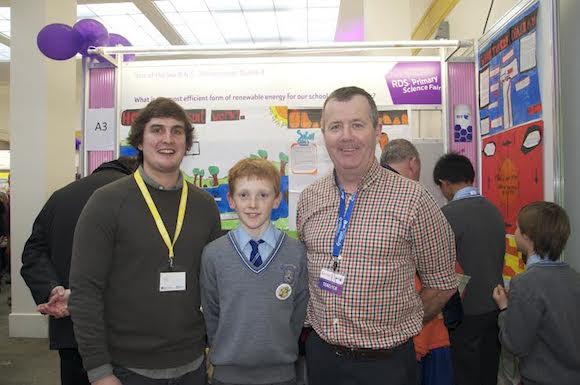 FORMER COLÁISTE AILIGH STUDENT PASSES ON HIS SCIENTIFIC KNOWLEDGE TO THE NEXT GENERATION!

And here is former Coláiste Ailigh student Séamús Ó Brollacháin along with one of his students from the the Star of the Sea National school in Sandymount, Dublin.

Seamús enetered his class in this year’s Primary school’s section of the BT Young Scientist.

The Irish medium college in Letterkenny continued its winning streak at this year’s show.

Coláiste Ailigh students Stiofian Ó Gallchoir and Cristian Ó Scalaí are pictured below with their display award which they received at this year’s BT Young Science Exhibition at the RDS in Dublin.

Their project examined the changing levels of glucose in the blood before, during and after exercise.

Our bottom picture is of Coláiste Ailigh students Maighread Nic Ceallabhuí, Joyce Wylde and Aisling Ní Fhearáin with their display award which they received at this year’s BT Young Science Exhibition at the RDS in Dublin. Their project was titled: An bhfuil eifeácht ag cinealácha éagsúla bia ar leathnú an mhac-imreasc?

FORMER COLÁISTE AILIGH STUDENT PASSES ON HIS SCIENTIFIC KNOWLEDGE TO THE NEXT GENERATION! was last modified: January 12th, 2015 by John2