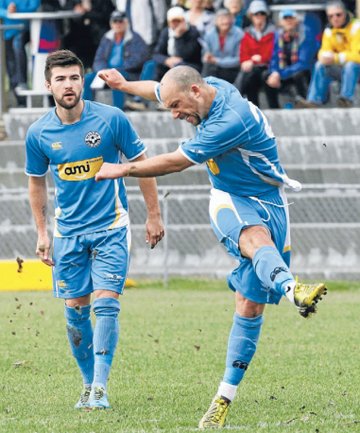 Davitt Walsh in action for Nelson Suburbs during his time in New Zealand. Walsh has signed for Irish League outfit Institute.

Walsh is a decorated striker and has played for a whole host of clubs in both the League of Ireland and the Northern Ireland Premiership.

Walsh previously played for Institute as well as Ballymena United and Lisburn Distillery in the Northern Ireland Premiership.

While in the League of Ireland Walsh has played for Finn Harps, Derry City, Shelbourne and Bohemians.

Paul Kee has snapped up the experienced striker after he cut short his spell with the Nelson Suburbs in New Zealand.

Walsh scored 7 goals in nine appearances for the Nelson Suburbs and his impressive form led to him being touted by several clubs in New Zealand’s Premier League.

However, Walsh failed to settle and opted to return to home despite his successful spell at the club.

Kee will be hoping he can get best from Walsh who has the undoubted quality and class for this level of football.

With Institute struggling to find the net since the departure of Stephen O’Flynn, Kee will be hoping he can solve their goal scoring issues.

Walsh is not expected to feature in Institute’s crucial match with fellow strugglers Dungannon Swifts on Friday.

It’s expected Walsh will not feature for a few weeks until he gets his paperwork from New Zealand sorted with the IFA.