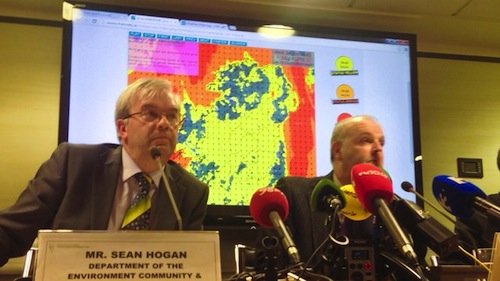 The National Emergency Committee held a press conference today to warn the public about the dangers of tonight’s storm.

Schools across Donegal have been told that they can close tomorrow.

The Department of Education today issued advice in light of the severe and potentially damaging winds affecting certain parts of the country as Storm Rachel reaches our shores.

They say schools in the Status Red area should consider NOT opening.

Currently, Met Eireann has issued such a warning for Donegal, Sligo, Mayo, Galway, Clare, Limerick and Kerry until noon tomorrow.

According to Met Eireann, wind gusts of 130 to 150km an hour are possible as well as high seas near the shore.

In a statement today, the department said schools should consider not opening where a Status Red weather warning related to wind is forecast.

The high winds could coincide with the periods during which students and staff would be expected to travel to and from school.

The full guidance is available on the department’s website.

The general guidance from the National Coordination Group on Severe Weather is that the public are asked to monitor Met Éireann forecasts for their area and to be aware of the weather conditions and to heed safety warnings.

The travelling public are encouraged to monitor road conditions as well as transport operator services over national and local radio/tv, websites and social media for possible impacts.

DONEGAL SCHOOLS TOLD THEY SHOULD CONSIDER NOT OPENING AS STATUS RED STORM CLOSES IN was last modified: January 15th, 2015 by Stephen Maguire