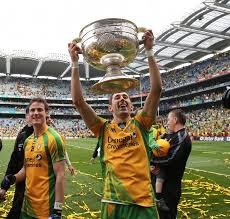 Tributes have poured in for retired Donegal player Rory Kavanagh.

The GAA fraternity in Donegal have taken to social media accounts to express both their disappointment and gratitude to Rory Kavanagh who has decided to retire from inter-county football after fourteen years.

Kavanagh has been a wonderful servant to Donegal over the years and was an exceptional player.

Kavanagh was a pivotal figure during Jim McGuinness’s trophy laden era and played a crucial role in Donegal winning their first All-Ireland title in twenty years when they defeated Mayo in 2012.

He could have retired a double All-Ireland winner but Donegal were narrowly defeated to Kerry in the final.

It was to be Kavanagh last appearance in a Donegal jersey.

GAA commentators, players and politicians have taken to Facebook or Twitter to pay tribute to St Eunan’s clubman.

“He has given our County great service for many years and is still one of the best midfielders in the Country. ‪#‎willbemissed‬

Eamon McGee tweeted a picture of Kavanagh on Twitter with the following tagline.

“Without doubt one of the best players I’ve ever played with.

Fianna Fáil Cllr Ciaran Brogan posted, “Sad to hear Rory stepping down from Donegal team, a great leader on and off the pitch and playing the football of his life.

“Maybe we could get Joe Brolly to have a go again and Rory will return. What do you think of that Joe?

Former MEP Pat ‘The Cope’ Gallagher also described Kavanagh as a wonderful servant and a great player to Donegal and thanked him for his years of service.

Donegal supporter Mairead Browne posted, “Big loss for Donegal, enjoy your retirement and thanks for your commitment over the years.

While one Donegal supporter thinks Kavanagh will be coaxed out of retirement in a few weeks.

With Anthony Thompson based in the UK, and Leo McLoone unlikely to return for Donegal this year, his retirement is another blow for the new manager.

GAA FRATERNITY PAY TRIBUTE TO RORY KAVANAGH WHO HAS CALLED TIME ON HIS DONEGAL CAREER was last modified: January 15th, 2015 by Mark Forker