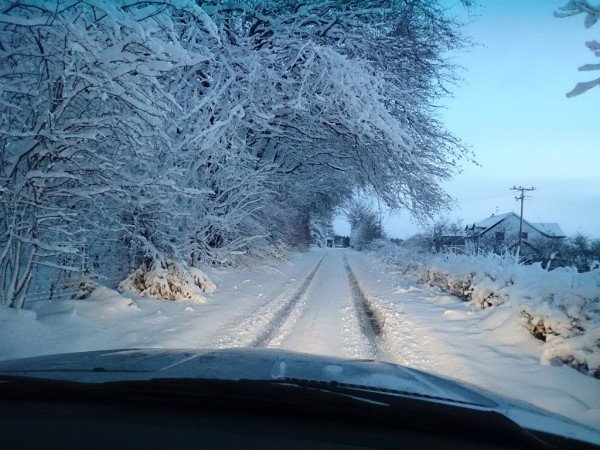 COLDEST WEEKEND OF YEAR AND MORE SNOW FORECAST FOR DONEGAL

Donegal is set to suffer the coldest weekend of the year with temperatures plunging to -7 degrees in places.

More snow and frezing conditions are forecast for Donegal this weekend and into next week.

And there will be more snow across the North-West right up until next Wednesday.

The warning has just been issued by Met Eireann who admitted the cold snap is here to stay for the foreseeable future.

The forecast comes following a week of unsettled weather culminating in the arrival of Storm Rachel yesterday.

More than 300 homes, the majority in the west of the county, are still without power after up to 12,000 customers were knocked off the grid yesterday.

Tonight will be cold, with scattered showers of sleet and snow, mainly in Atlantic coastal counties at first and in Ulster, becoming more widespread, with accumulations in many areas. Some clear spells also. Widespread frost, with icy stretches on untreated surfaces and hazardous driving conditions. Lowest temperatures 0 to minus 3 degrees.

Tomorrow, Saturday, will again be cold, with further scattered showers, some of them of snow, especially over high ground and mostly in the west and north. Further east will be drier and brighter but it’ll be a cloudier day overall. Temperatures during Saturday will be between 2 and 4 degrees generally, in a moderate west to southwest breeze.

The cold snap will continue up to and including Wednesday next, with severe night frosts, a risk of freezing fog and further wintry showers. However, there will be some sunny spells also.

Saturday night : Bitterly cold, with air temperatures of minus 1 to minus 6 or minus 7 Celsius, leading to a widespread severe frost, with a risk of icy stretches. There will be further wintry showers of hail, sleet and snow, especially across the northern half of the country, but good clear spells further south.

Sunday : Very cold, with sunny spells and scattered showers, some of hail and sleet, with some snow showers also, especially over high ground, but possibly at lower levels also, especially in the north and east. Max. 3 to 7 C, in a moderate to fresh north to northwest wind. Many areas dry overnight, with widespread severe frost, but further wintry showers of sleet and snow will occur, mainly along Ulster and eastern coasts. Risk of freeing fog also.

Monday : Still bitterly cold. Most areas dry, with light winds, but rain and sleet will develop in the southwest and west later, with moderate southerly winds, extending eastwards Monday evening and night, turning to snow in places, with severe frost and a risk of freezing fog overnight.

Tuesday & Wednesday : Little change, as the cold snap continues, bringing some wintry showers and frosty nights, but a good deal of dry, with sunny spells, especially in the east and south. Winds mostly moderate, west to northwest.

Further outlook : Early indications suggest that it will become less cold and unsettled for the end of the week and weekend.