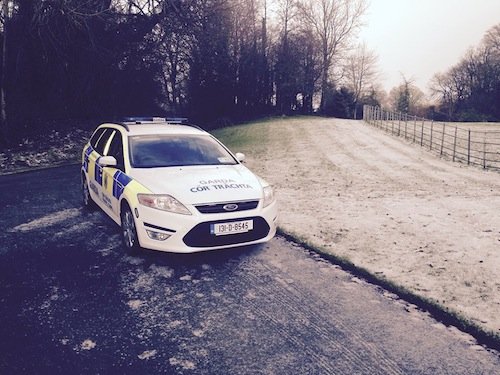 Gardai arrive at Oakfield park to examine the discovery.

Gardai have been called after unidentified bones were found on the estate of multi-millionaire businessman Sir Gerry Robinson.

The bones were found buried beneath a huge Beech tree on the grounds of the former TV boss’s estate in Raphoe.

Some of the bones which were found.

Gardai sealed off the area and began an examination of the remains.

It has not ben established yet if the bones are human or from an animal.

A spokesman for Oakfield Park said “On inspection of the tree we noticed some large bones under where the roots were. Given the location of the bones under an ancient tree the bones have been there a very long time.

“We couldn’t distinguish if the bones were human or animal so we had to follow procedures and informed An Garda Síochána who promptly carried out a detailed investigation.”

A Garda spokesman confirmed a full investigation has been carried out into the discovery.

He added that the bones have now been sent off for analysis.

Oakfield House was by Sir Gerry Robinson and his wife lady Heather Robinson in 1996.

Since then the couple have spent a fortune renovating the 18th century Georgian house which sits on 100 acres of lush woodlands.

Sir Gerry, the former Granada TV boss from the village of Dunfanaghy, is popular with locals and opens up his pile in the summer to visitors.

The colourful businessman has even installed an old steam-train which travels through the grounds of the estate.

UPDATED: The bones have now been identified as that of an animal.

Th scene of the fallen tree underneath which the bones were discovered.