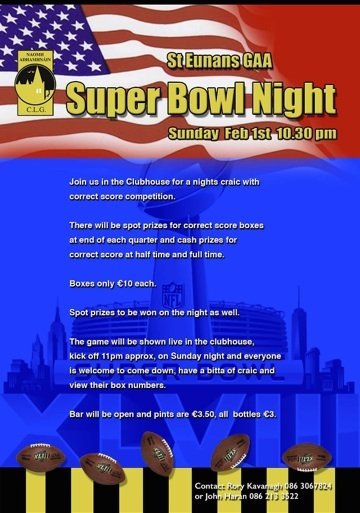 The social club at O’Donnell Park was once the focus of life for the Letterkenny club and it was the place to go back in the 80s and early 90s. It was a real hive of activity.

Now the club is re-opening the lounge for private functions, with a number of 21st birthday parties taking place over the course of the next few weeks.

Even club captain, and Donegal All Ireland Champion Rory Kavanagh, and veteran John Haran, 2014 County Final Man of the Match, are getting stuck in – by launching An American Themed Super Bowl night there on Sunday February 1st.

Club treasurer Niall Doherty explained: “The social club is back by popular demand.

“We are planning a refurbishment this year but the club house has already been used for a number of functions in recent weeks.

“I’m told it was the place to go in the 80s and 90s for a great night out – I’m obviously too young to know that! but John Haran fondly remembers having his 21st here in the early 1980s!

“It’s part of a long-term plan for St Eunan’s and we’ve had a fantastic response from our club members.

“John and Rory are planning the Super Bowl night; it promises to be great craic. It’s free entry with spot prizes and some drinks promotions.

“The club is also hosting a 70s/80s fundraiser for the club teams on Valentine’s Night – Saturday 14th February 2015 – in the Clubhouse. It’s great to see so many club members row in behind the club executive and put their shoulder to the wheel.”

IT’S BACK TO THE FUTURE AT ST EUNAN’S GAA SOCIAL CLUB was last modified: January 18th, 2015 by John2