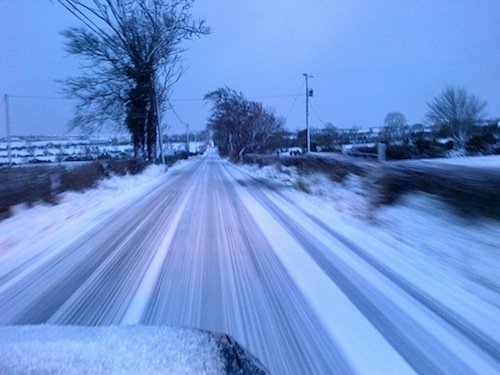 ANOTHER WEEK OF FREEZING TEMPERATURES – AND MORE SNOW!

Donegal is to shiver for another week with freezing temperatures and even more falls of snow. 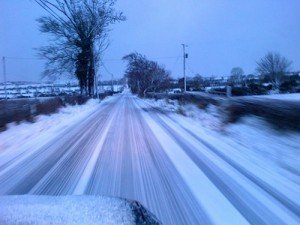 The bitterly cold weather which has hung over the north-west for the past week will continue with freezing fog, sleet and snow this week.

Temperatures plunged to -5C in some places last night with a severe frost this morning.

People are asked to take care with black ice on roads and many footpaths still dangerously icy.

And forecasters say Ulster could be hit by up to another 5cms of snow this evening with accumulations in places tonight and tomorrow morning.

Driving conditions could deteriorate with further falls of sleet and snow.

Wednesday is set to see even more snow and although Thursday and Friday may see a slight rise in temperatures, another cold snap is set to move in again next weekend.

Last night was very cold overnight, with a widespread hard frost and icy stretches on untreated roads. Mist and fog will form too, as winds fall off light, with some pockets of freezing fog in places. Lowest temperatures zero to -5 C.

Staying very cold on Monday, with frost, ice and fog slow to clear. A dry morning, with a little hazy sunshine in eastern areas, but rather cloudy generally. Outbreaks of rain and sleet will push into Connacht and west Munster during the afternoon, preceded by some snow in places. Top temperatures 1 to 4 C., generally but 5 or 6 C., along the southwest coast.

The wintry weather will continue on Monday night with further outbreaks of rain, sleet and snow. Snow falls possibly leading to accumulations of greater than 5 cm in places by Tuesday morning. It’ll be cold overnight with temperatures down to between zero and minus 3 degrees generally, but as low as minus 6 or 7 degrees over lying snow in Ulster. Winds will be light variable overnight. The rain and snow will clear western areas overnight.

On Tuesday morning there’ll be further falls of snow in eastern areas during the morning, but drier, brighter weather further west will extend eastwards and the afternoon will be mainly dry for much of the country. Then later Tuesday there’ll be wintry showers developing once again, becoming confined to coastal areas Tuesday night. During the day temperatures are likely to be between 2 and 6 degrees, the higher temperatures will be in the southwest of the country, with light to moderate southwest winds, becoming westerly overnight as temperatures fall well below freezing once again.

On Wednesday there’ll be rain, sleet and snow showers on the west and north coasts, pushing further inland at times, but it will be mainly dry elsewhere. Another cold day with sub-zero temperatures at night and light to moderate westerly winds.