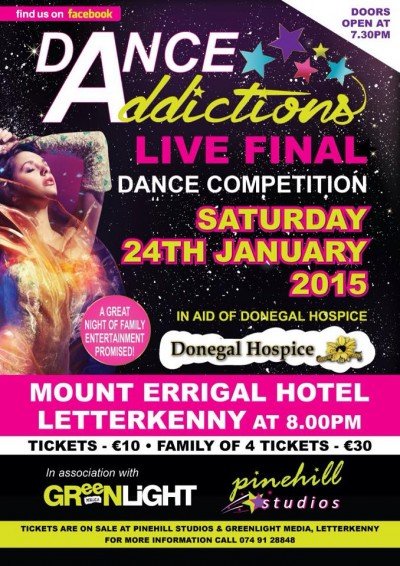 Donegal Daily in conjunction with Dance Addictions is giving one lucky reader the chance to win FOUR tickets to go and see the unique charity competition.

Dance Addictions is a Charity Dance competition and is the brainchild of Sarah-Marie McDevitt of Pinehill Studios.

She came up with the idea and together with Green Light Media have organised this fabulous event to raise important funds for the Donegal Hospice.

Sarah decided to do it in memory of her uncle John Glackin who received great care in the Hospice before his death.

Auditions were held in November last year at Pinehill Studios where over 50 acts from all over the North West came and performed in front of our panel of professional judges.

The acts comprised of all types of dance from Hip-Hop and Contemporary to Gymnastics and Irish Dancing.

The talent was extremely high and made the decision of the judges very hard.

In December, the final 13 were announced and have been working hard since preparing for the Live Final in The Mount Errigal Hotel on the 24th of January.

The events kicks of at 8pm and will be a great night of entertainment for all the family.

The acts who will be dancing for the title of Dance Addictions Winner 2015 and a cash prize of €1000 are Amy & Cait, Bonkerz, Ceryz & Zara May, Conor, Dynamic Duo, Fusion, Jamie, Jimmy Tastics, Kidz in the Hood, Nathaniel Rennick, Shining Stars, Shockerz and Street Soldiers.

The acts will be judged on the night by our professional panel, MC on the night will be Justy from I-Radio and the final prize will be presented by Buster from Mrs Brown’s boys.

For further inquiries call 074 91 28848. Tickets will also be available at the door on the night but are selling out fast.

So join them for a fantastic display of dance from lots of genres and also to help support the Donegal Hospice. They’ll will have some great raffle prizes on the night too.