A Carndonagh man who was ‘out of his mind with drink’ and grabbed a statute of Buddha before dropping his trousers at a Chinese takeaway has received a suspended jail sentence. 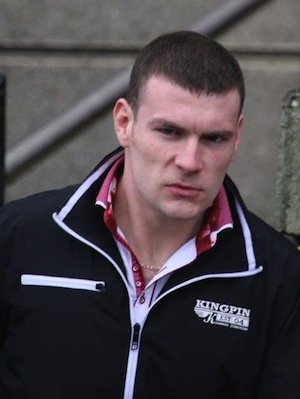 Dermot McGuinness, 28, terrified staff at the Ocean Court restaurant at the Diamond in Carndonagh, Co Donegal on May 26th last.

He appeared before Carndonagh District Court yesterday after undergoing a probation report for his behaviour.

Inspector David Murphy told a previous court that gardai had found McGuinness “out of his mind with drink” inside the takeaway.

The owner complained that McGuinness, from Churchtown in Carndonagh, had grabbed a statute of Buddha, was roaring and shouting and had just thrown a table over the counter.

The Inspector said McGuinness had also taken his trousers down. He handed in still images taken from the takeaway’s CCTV cameras showing this and the other offences.

McGuinness admitted being intoxicated in a public place, using threatening and abusive language and criminal damage.

It took the inspector some time to go over McGuinness’s previous criminal record which included several convictions for assault.

Solicitor Frank Dorrian told Judge Paul Kelly: “The recurring pattern with this man is one of alcohol abuse; he has little or no recollection of what went on during this incident. It is inexplicable as to what he was doing.

“He had been drinking vodka around the clock at that time.”

Mr Dorrian said however that McGuinness’s life had now changed. He was no longer drinking and was getting support at AA meetings.

He was determined to continue with this new life and had brought €186 to court to pay for the damage done to the restaurant.

Judge Kelly told McGuinness he had an atrocious record and asked him if he had viewed the pictures of himself dropping his trousers and jumping overt the counter of the restaurant.

He sentenced McGuinness to 120 hours community service in lieu of six months in jail for threatening and abusive behaviour, was jailed for three months but had that suspended for a year for criminal damage and also fined his €100 for intoxication.