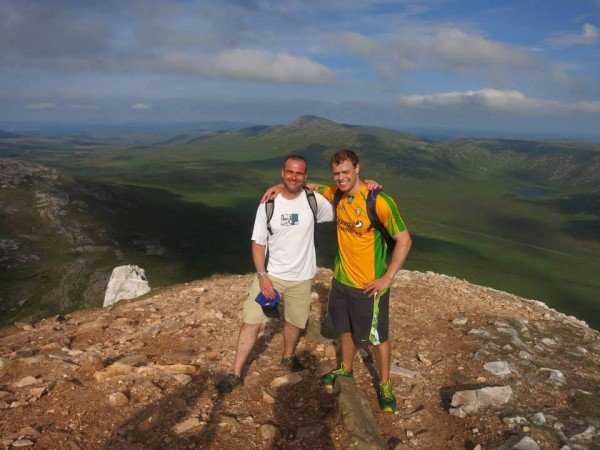 Darren Jones pictured with his relation Daniel Smith after the pair climbed Mount Errigal last summer. Darren was involved in a dramatic rescue effort this morning after an Irish fishing vessel sank off the Scottish coast.

A Winchmen who played a pivotal role in rescuing Galway fishermen from their stricken vessel earlier this morning has strong connections in the Rosses area.

Darren Jones is part of the British Coastguard Rescue unit based in Stornoway that was involved in the dramatic rescue.

Darren is a regularly visitor to the Rosses, as his mother-in-law Frances Dockerty was from Keadue.

His wife Tara spent every summer in Donegal during her childhood where she visited her grandparents along with her mother Frances who sadly passed away four years ago.

Tara now brings her husband and their son Josh to Keadue every summer to visit her aunt Breda Smith.

The family love spending time in the area and love the beautiful scenery and beaches located in the area.

Darren’s Coastguard unit was deployed from their base in Stornoway after they received a distress signal from the Galway fishing boat Iuda Naofa.

Skipper Mairtín Ó Conghaíle of Inis Mór issued a distress signal when his boat began taking on water during high seas off the Scottish coast.

The boat was situated 48 miles off the Butt of Lewis and was sinking rapidly.

The rescue chopper dropped a salvage pump in an attempt to control the situation but it didn’t work.

Two of the crew were moved to a sister Aran Island vessel, while the other three crew members were dramatically winched upon the helicopter just as the ocean swallowed up the boat.

Darren said that he was just on-board the vessel when it succumbed to the high seas, but thankfully Darren and his colleagues managed to rescue the crew safely.

The weather was horrendous and its been described as a miracle that nobody was lost.

The men where then removed to the Western Isles Hospital in Stornoway on the Isle of Lewis where they were treated for mild hypothermia.

To Darren’s surprise he then met the men this evening having a meal in a local hotel.

Darren posted the following on Facebook, “It was great to see the three lads out of hospital and unbelievably having a Coke with dinner!! Hopefully they’ll be back with their families in Galway soon.

Well done to Darren and his colleagues and to all those brave men and women who risk their own lives to save others.

Thankfully everybody was rescued from this morning’s incident and all concerned are now safe and healthy.

The crew are expected to head back to Galway tomorrow afternoon.