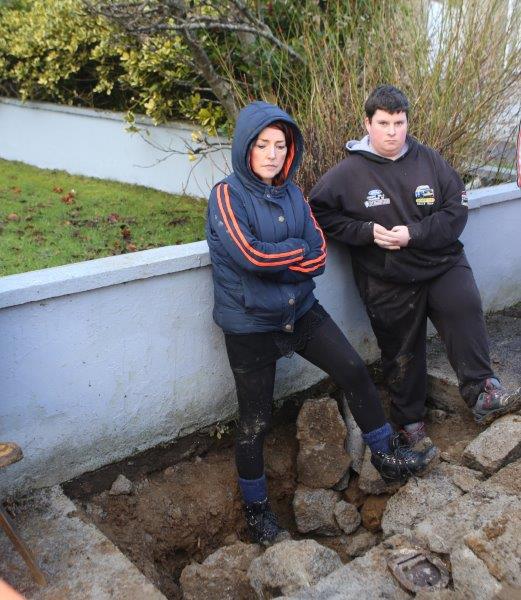 Margaret McClure and her son Mark who claimed they were assaulted by Irish Water officials this afternoon in Ashlawn. Pictures by North-west Newspix

A tense stand-off between residents in Letterkenny and Irish Water officials has escalated this afternoon after a women and her son claimed they were physically assaulted by workers.

Margaret McClure was protesting with other residents during the installation of water meters on the Ashlawn estate.

Her friend and neighbour Sharon McCabe persistently pleaded with Irish Water workers not to dig up her pavement as she did not want a water meter installed.

Workers look on as Ms McClure and her son stand in the hole.

However, her pleas fell on deaf ears and Irish Water officials proceeded with their work.

This prompted Margaret McClure to jump into the hole to stop the officials carrying out their job of installing the water meter.

She was quickly joined by Sharon McCabe and a sit-in began.

Ms McClure claimed she was then pushed and shoved by officials who backed into her in an attempt to remove her from the hole.

She now claims she has received bruising on her back as a result of the exchange.

Despite the jostling, Ms McClure claimed Irish Water workers kept saying ‘keep digging’ and despite asking officials to stop they continued to wrestle with the two women.

Margaret’s son Mark then jumped into the hole to support his mother.

Ms McClure then claims he was hit on the foot with a shovel.

Ms McClure told Donegal Daily, “This is a peaceful protest, no means no.

“Sharon told them repeatedly she didn’t want her pavement dug up but they wouldn’t listen.

“They just carried on anyway, smirking at us in an attempt to anger us even further.

“I then decided enough was enough and jumped into the hole thinking they would stop, however they kept saying ‘keep digging’, ‘keep digging’.

“One guy started backing into me and was using his elbows to force me out of the hole and he rammed me against the wall.

“Then my son jumped in and he was hit with a shovel on the foot deliberately, I couldn’t believe how physical they were being, and I was shocked when they assaulted my son.

“They were pushing myself and Sharon back so much that I’ve sustained bruising on my back.

“It’s the last thing I need as I was in the hospital this morning having an X-ray on my back!

An Irish Water worker claimed the crowd of protesters in Ashlawn were a ‘mob’ and said they were responsible for vandalising water meters in the locality.

“They are a mob. A woman requested a water meter to be put in which we did, despite pressure from this crowd of so-called peaceful protestors not to give in.

“We installed it on Friday night, but the woman contacted us on Saturday morning to say she had no water because her metre had been destroyed.

“Is that a peaceful protest? It’s not it’s reckless vandalism and that poor woman was terrified by these so-called peaceful protestors who tried to force her into not giving in.

“She wanted the meter installed and wanted to put the whole thing behind her, but because she wanted it in they then just went and vandalised it.”

The residents angrily denied that they were responsible for the vandalism of the water meter and totally refuted his claims they were involved.

They also condemned any vandalism and said that’s not what they’re about.

Resident Evelyn Cunningham said, “If people don’t want water meters installed they should respect that and move on.

“They are attempting to intimidate people and it’s not on, if we don’t want them they should accept that and leave us alone.

“This has been going on now for a fortnight and it’s totally unacceptable, people are afraid to leave their homes, in case they come back and found a water meter installed.

“We’re peaceful protestors, we don’t want them installed simple as that, other residents in our estate have agreed to have them installed and that’s fine too, it’s there decision.

Another resident Karen Kirwan said she wasn’t against paying for water but it was the fears of privatisation later down the line that she was afraid of.

“I don’t mind paying for water, but it’s the possibility of privatisation which frightens me.

“There’s been no guarantees it won’t be privatised and for me that speaks volumes and that’s why I’m protesting against them being installed.

The Irish Water contractors eventually decided to move on following the arguments, but are expected to return again tomorrow.

She made a statement to Gardai but said she was not pursuing any charges against the workers.

MOTHER AND SON CLAIM THEY WERE ASSAULTED DURING TENSE STAND-OFF WITH IRISH WATER was last modified: January 22nd, 2015 by Mark Forker