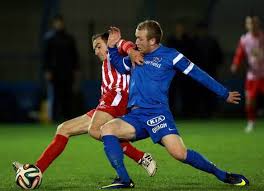 Raymond Foy in action for Ballinamallard may make a move back to Finn Park.

Former Finn Harps players Marc Brolly and Raymond Foy are back in pre-season training with the club with a view to securing a move back to Finn Park.

That prompted Foy to go on loan from Derry City to Northern Ireland Premiership side Ballinamallard in August.

Foy was a regular for the first number of months at Ferney Park but has recently found himself out of favour.

That has prompted the possibility that Foy may make a return to Finn Harps where he previously played in the 2010 and 2011 season.

Marc Brolly has is a Finn Harps centurion and made his debut for the club back in 2007.

He was part of the Derry City side that won the FAI Cup in 2012 against St Patrick’s Athletic.

He returned to Harps under Peter Hutton in 2013, but left after just three months.

He trained with Finn Harps last July but opted against making a return at that time because he felt he wouldn’t be able to commit fully due his work commitments.

The duo’s return would be a welcome boost to the Finn Harps squad.

With American midfielder Pat McCann leaving, Foy could fill that gap straight away.

Plenty of Harps fans believe Brolly’s best position is up front and considering Harps are struggling in that department he could well be utilized there by Ollie Horgan.