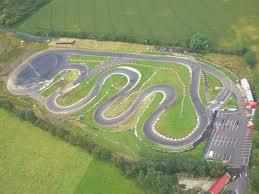 A Donegal karting centre owner has appealed to Donegal County Council to be allowed to open on Sundays to host prestigious tournaments.

The Xtreme Karting track in Castlefinn

Castlefin Xtreme Karting Centre is prevented from opening due to planning regulations.

Karting Centre Owner Marcus Griffin said they have ben met with a wall of silence from Donegal County Council and could bring huge crowds to Donegal for such events.

He revealed “At the beginning of each year we supply Donegal County Council with a list of proposed dates given to us by groups such as Super Motos NI and Mini Motos NI. These groups want to use our facilities to hold one day events which would attract a large number of visitors to the area.

“Unfortunately, when we apply to Donegal County Council for planning permission for these events we are met with a wall of silence. The result is that these groups have found other Karting Centres to hold their events so we lose out.”

Under existing planning regulations Sunday opening is permitted for events of this nature but strict restrictions must be met.

However Marcus feels that he has met any guidelines imposed on him by Donegal County Council thus far, and feels some movement is warranted.

Sinn Fein Cllr Gary Doherty is backing the appeal by the karting boss.

“The Karting track in Castlefinn is one of the major tourist attractions in the area and it has the capacity to provide a valuable recreational facility for the people of the locality.

“However the stringent planning regulations which prohibit any Sunday opening are seriously harming the track’s ability to function as a profitable business. I would ask Donegal County Council to seriously reconsider their position on this”

The Karting track, which has been open since 2005 currently have planning permission for operation from Monday-Saturday, but only for the running of Go-Karts. Previously the track has been used for other activities such as off-road tank driving, hamster ball and car drifting but all were deemed to be non-permissible by the Council.

Under existing planning regulations Sunday opening is permitted for events of this nature but strict restrictions must be met. However Marcus feels that he has met any guidelines imposed on him by Donegal County Council thus far, and feels some movement is warranted.

Cllr Doherty also feels the case is justified. “Marcus has a clear business plan and has set out the limited number of Sundays he wishes to open, limiting them to one Sunday per calendar month. I feel the impact on the local environment of a limited number of Sundays would be negligible. In fact,I believe attracting more visitors to the Karting track is in the best interest of the village and the wider Finn Valley area.”

Find your dream job at the One-to-One...