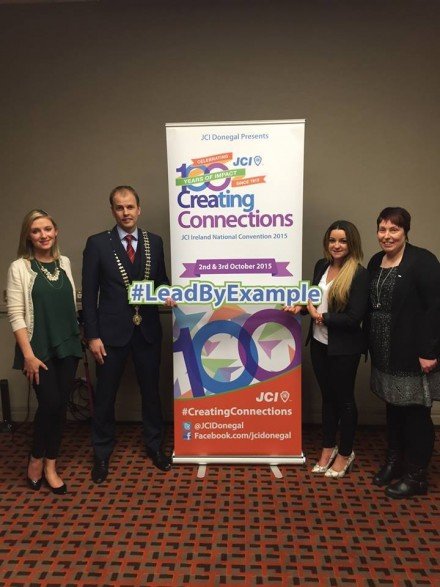 Junior Chamber International (JCI) Donegal have secured a bid to host the JCI Ireland National Convention in Donegal in October.

This convention will bring 100’s of tourists from all over Ireland and the world to Donegal.

The National Convention is held every year in different locations around Ireland.

JCI Donegal hope to make this convention bigger and better than ever and to show Donegal as a destination to people from Ireland and beyond.

JCI National Convention is a two day event with training, debating, speakers, an awards ceremony and a gala ball.

Delegates will also treated to activates to showcase Donegal. The convention will be help in the beautiful Clanree Hotel in Letterkenny.

Plans are being put in place at the moment but it looks likely a trip to Glenveagh will be on the cards. JCI Donegal want to show the delegates all that Donegal has to offer so are appealing to local producers to get in touch.

“We hope to have sample food and drinks from local producers, Irish music from local musicians and we know that the beautiful Donegal landscape will speak for itself!

“Each JCI Member shares the belief that in order to create lasting positive change, we must improve ourselves and the world around us.

JCI Donegal has been running for one year now and has become officially affiliated to JCI Ireland this month.

JCI Donegal is now part of the largest personal and leadership development organisation for young people in the world.

JCI Donegal meet once a month to discuss upcoming events, socialise and to participate in training.

Bradley added, “We urge young people in Donegal to come to our meeting on the 26th of January.

JCI Donegal are proud to announce that their guest speaker will be one of Ireland’s best known motivational speakers Gerry Faloona.

Bradley concluded, “Gerry’s inspirational approach to his subjects combined with his legendary wit and humour ensures that this session not only be informative but will highly entertaining as well.

To help ensure that this is their best year to date, make sure and join them on Monday the 26th January in Gallagher’s Hotel Letterkenny at 7.30pm and learn how to dispel disappointment, negativity and self doubt, take hardship on the chin and learn how to turn effectiveness in greatness!

Come to JCI Donegal and Be better!