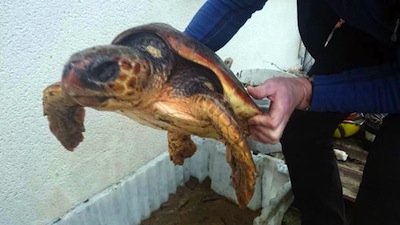 SADNESS AS LOGGERHEAD TURTLE WASHED UP ON DONEGAL BEACH DIES

A young loggerhead turtle washed up on a Donegal beach has died at the Exploris Aquarium in Strangford Lough, Co. Down.

The turtle who was named Columbo by rescuers who found him after he was washed ashore after being dragged hundreds of miles off course.

Columbo was discovered by Grainne Rua on a beach in Glencolmcille on Saturday evening.

She contacted marine experts who immediately transferred the stricken turtle to the Exploris Aquarium.

Aquarist’s battled to keep Columbo alive but he sadly passed away despite the best efforts of all the team at the Exploris Aquarium.

A spokesperson from Exploris Aquarium said, “Logger head turtles are found in the Atlantic and usually follow the Golf Stream.  It is possible that Columbo became unwell and drifted or was washed off course by a storm.

“A post-mortem will reveal whether Columbo did have an underlying condition which may have caused his death.  The team are incredibly saddened to lose this magnificent turtle.”