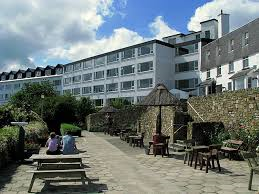 DONEGAL HOTEL ONCE BELIEVED TO BE WORTH €6 MILLION – GOING UNDER THE HAMMER FOR €700,000

The Shandon Hotel which has been closed since 2012 is up for auction next month.

A Donegal Hotel that has been closed for the last couple of years is up for auction in Dublin next month.

The Shandon Hotel and Ocean Spa once believed to worth around €6 million is now going under the hammer for less than €700,000.

The hotel is located in a stunning setting that overlooks the beautiful Marble Hill Beach in Portnablagh.

It was a hugely popular hotel when it was in business and regularly attracted tourists from all over Ireland and the UK.

The location of the hotel as well as the fantastic spa facility ensured its popularity with those who stayed there.

However, after it was initially taken into receivership in February 2011, the hotel was forced to close shortly after.

The Shandon Hotel was managed by local couple Dermot and Catherine McGlade before Bank of Ireland officials called receivers in.

There was a significant number of jobs lost when the Shandon closed, but it is hoped that if the hotel is bought, that it will be re-opened which would create more jobs in the area.

Despite the closure of The Shandon Hotel, Dunfanaghy has been a tourism hotspot over the last number of years and most weekends sees a steady influx of tourists to the scenic seaside village.

If the Shandon were to re-open under new owners it would strengthen the tourism industry even further in Dunfanaghy.

The prospect of job creation if the Shandon were to re-open would also be added bonus to the local economy.

DONEGAL HOTEL ONCE BELIEVED TO BE WORTH €6 MILLION – GOING UNDER THE HAMMER FOR €700,000 was last modified: January 28th, 2015 by Stephen Maguire
Tags:
auctionBusinessDunfanaghynewsPortnablaghSALEThe Shandon Hotel