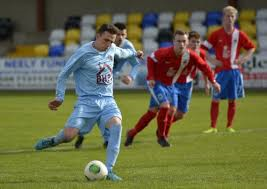 Eamon McConigley moved quickly to tie up McVeigh who decided to leave Institute after falling out of favour at the club in recent weeks.

McVeigh was a regular in Paul Kee’s side in recent months, but since the turn of the year McVeigh hasn’t featured at all and that prompted the Portsalon native to seek a departure from the club.

McVeigh was a popular player with the club’s supporters during his short stint with the club, who loved his tireless work ethic, energy and enthusiasm.

McVeigh scored a 90th minute winner against Warrenpoint in October but that proved to be his only goal for the club.

However, his signing will be seen as a huge boost for Letterkenny Rovers ahead of the new USL season which gets underway next month.

McVeigh’s pace and power will be a handful for defences in the USL league and Letterkenny will be hoping the former Fanad United striker can fire them to the league title.

With David Shovlin, Ryan Gildea, Darren McElwaine and Jonathan Minnock already resigned Letterkenny will be hoping they can win some silverware this year.