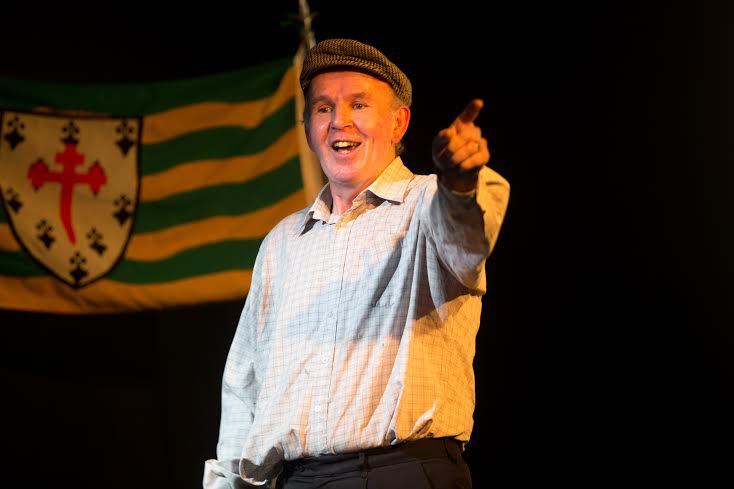 A large crowd gathered in the Teachers Club in Parnell Square in Dublin last weekend for three productions of the one-man show on the life and writings of the famous Rann Na Feirste and Donegal author who died in 1990 aged 90.

The show ‘Idir dhá cheann na hImní’ written and performed by Noel Ó Gallchóir, gives a dramatic insight into the eventful, troubled and tragic life of Seosamh Mac Grianna as well as showing his great imaginative style of writing.

The use of stage lighting, music and some props helped to encapsulate the audience with childhood stories and different aspects from his books ‘An Druma Mór, An Grá agus an Ghruaim and Mo Bhealach Féin’.

He is considered as one of the Greatest Writers of 20th Century Ireland.

The Teachers Club, Parnell Square (managed by Annagry man Tadhg Mac Phaidín) was an ideal venue for those living in Dublin and those who had an interest in Mac Grianna’s work.

All three shows boasted a great atmosphere and a packed house where the audience were treated after the drama to music from Donegal singers Maria McCool, Brian Danny Minnie Ó Domhnaill, Máire Ní Choilm, Caitlín Nic Niallias and members of the famous ‘Na Casaidigh as well as Cathal ‘banjo’ Ó Curráin. The proceeds from the event were given to the Peter McVerry Trust for the homeless.

The show in Gort a’Choirce next week..

The local Glór na nGael group have organised an Oíche Dhrámaíochta in Halla Na Paróiste, Gort a’Choirce next Monday 2nd February @ 8.30pm which will feature the one man show on Seosamh Mac Grianna and other musical items.