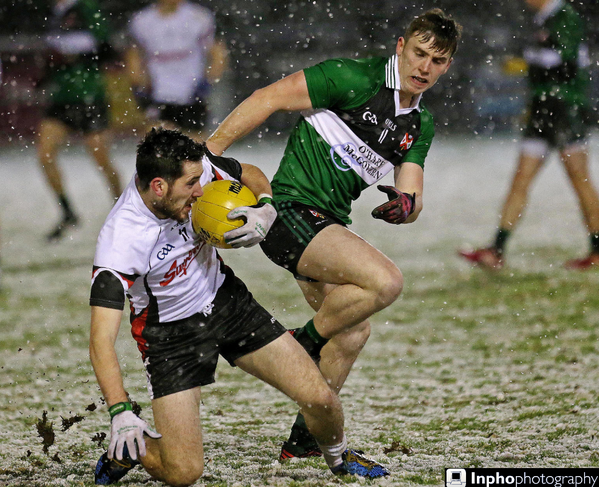 Mark McHugh battles for possession in the snow during their superb extra-time win over Queen’s University Belfast last night.

There was delight for Martin McHugh and his sons Ryan and Mark after their Sligo IT side defeated Queen’s University Belfast in a thrilling contest played in atrocious weather conditions.

However, Groundsmen at ‘The Dub’ in Belfast managed to get the match on but conditions were far from ideal.

Sligo settled the better and a goal from Evan Regan put them in a commanding position.

Queen’s fought back and went in at half-time trailing by just a point.

In the second-period Queen’s took control of the match and levelled the contest which took the game into extra-time.

Queen’s then missed a glorious opportunity to seal victory when Ryan Murray missed a penalty.

That spurred Sligo IT on and they sealed a superb four-point win.

It was a brilliant result for Sligo IT and that now sets up a quarter-final clash with UCC.

Mark McHugh tweeted afterwards that it was ‘One of the most difficult match I’ve ever played in’.

DELIGHT FOR MCHUGH FAMILY AS SLIGO IT PROGRESS IN SIGERSON CUP COMPETITION was last modified: January 29th, 2015 by Mark Forker