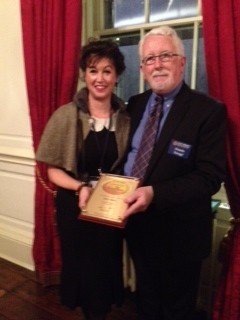 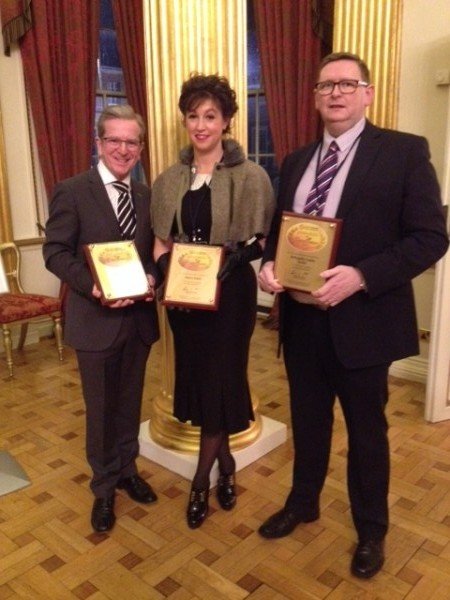 Vicky with James Mc Ginn Europa Hotel Belfast and Norman Bc Bride of Balllygally Hotel, both part of the Hastings Hotel Group. 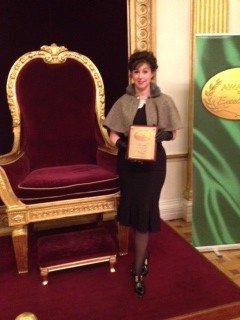 For the 14th time in as many years, Kee’s Hotel has once again been recognised by CIE Tours at their Annual Awards of Excellence, which took place in Dublin Castle this week.

This glittering event was attended by senior industry figures throughout Ireland and was  presented by Vivienne Jupp, Chairperson of CIE and President Brian Stack.

As one of the largest inbound tour operators to Ireland, CIE survey their passengers annually.

They assess best visitor experience, including most professional and friendly staff, excellence of food and overall service, attention to detail and standards of comfort and service.

This year’s award acknowledged the hotel’s outstanding performance based on the feedback from international visitors to the island of Ireland during 2014.

Keeping up the long traditional of hospitality is important to Vicky whose family have had a business presence in the town since 1892.

The Kee Family now into their  fourth generation of hotel-­‐keeping, will soon celebrated 125 years of ownership of one of County Donegal’s best-­‐ known hotels.

For us, it’s all about team performance and I couldn’t achieve such  success without my hard-­‐working staff,” acknowledged Vicky.