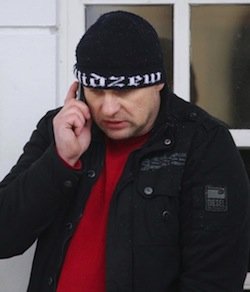 MONEYLENDER FOUND GUILTY OF THREATENING TO KILL MAN OVER €70 DEBT

A moneylender has been found guilty of threatening to kill another man – because he owed him just €70.

Miroslaw Klucsak was found guilty of threatening to kill another man yesterday. Pic by Northwest Newspix.

Miroslaw Klucsak put a gun to the head of his fellow Polish national Leszek Majewski when he burst into his apartment in Letterkenny.

Klucsak, 39, a former miner and security guard, said he ran a legitimate business paying for people’s grocery shopping and then charging them for the transport.

Letterkenny Circuit Court heard he collected the money owed to him outside the local post office every Wednesday and Thursday when the Polish community collected their welfare payments.

Judge John O’Hagan heard that on April 4th, 2013, Kluczak met Majewski and his wife outside the post office on Main Street and demanded his cash.

The defendant couldn’t pay the remaining €70 of the cash as he had to transfer money back to his 18 year old son in Poland for schoolbooks.

Later that morning, Klucsak visited Leszek and his wife Barbar at their home at 20 Celtic Apartments near Domino’s Pizza.

The accused pulled a gun from beneath his coat and put it to his head.

Garda Darren Carter said he met Barbar in a very frightened state when she called Gardai.

“She was in such a state of panic. She was trembling. She was just beckoning us to follow her,” he said.

Garda Carter called to the home of the accused and asked about the alleged incident and if he had a weapon.

He said he did not mix with the Polish community as they drank too much and did not have a good reputation.

He said he visited the gym daily and took out adverts in a local Polish contacts website to help his business and that he did not collect welfare benefits.

Barrister Peter Nolan said his client had denied that any gun was ever used.

He put it to Mr Majewski that himself and his wife drank too much vodka and their apartment was strewn with empty alcohol bottles.

The couple completely denied this and Garda Carter said this had not been the situation he found at the couple’s apartment.

Barrister for the state, Ms Patricia McLoughlin, described this as a “mean lie” and that it was simply not true.

She said the defendants accepted that they owed money but said the evidence was there that they had been threatened.

The jury took an hour to reach their decision and found Kluczak guilty of making threats to kill and demanding money with menace.

Kluczak was released on continuing bail.