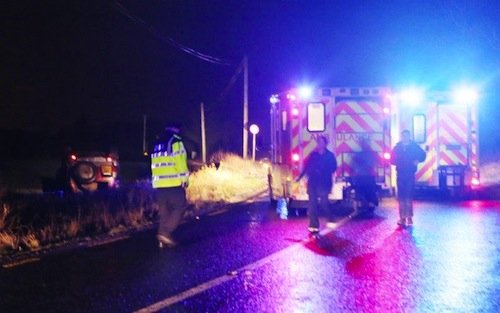 The scene of tonight’s crash in which resulted in two men being rushed to hospital. Pic by Northwest Newspix.

Motorists have been asked to exercise extreme caution on Donegal’s road after a serious accident in which two men have been rushed to hospital.

The men were in two separate jeeps which crashed into eachother at Sheskin on the main Letterkenny to Lifford Road near Raphoe this evening.

Gardai say the roads are extremely treacherous and people have been warned to drive slowly and with care.

It is understood one of the jeeps went out of control and struck the other vehicle before ending up in a field on its roof.

Three ambulances and a number of other emergency vehicles attended the scene of this evening’s crash which happened just after 9pm.

It is not understood that either victims were seriously injured.

Gardai have appealed to people to take care as hail, sleet and slow continue to fall across the county with temperatures plunging below freezing overnight.