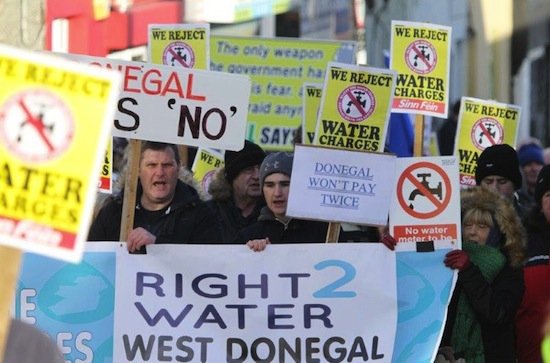 UP TO 5,000 PROTESTORS KEEP PRESSURE ON GOVERNMENT WITH WATER TAX RALLY

Protestors at today’s rally in Letterkenny. Pic by Northwest Newspix.

Up to 5,000 people marched in Letterkenny today to keep pressure on the Government over the controversial water tax charges.

The large crowd carried placards and chanted slogans on what is the last day for officially registering with Irish water for the service. 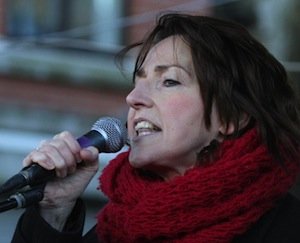 The crowd gathered at the Port Roundabout and marched up the Port Rod towards Market Square.

A number of speakers addressed the crowd include Maggie McClure who claimed she was assaulted by Irish Water workers outside her home in Ashlawn, Letterkenny recently.

Right2Water Donegal say they were delighted by the large turnout despite the poor weather conditions.

Right2Water Donegal Chairperson Charlie McDyer was delighted with the turnout.

“It was fantastic that people turned out in such large numbers. The Government may try to ignore us but we are going nowhere. Our message to the people is ‘do not be afraid of their scare tactics, together we can achieve a decisive victory’.

Among the others to speak were Cllr John O’Donnell and Simon McElroy. All had the same message, ‘the people of Donegal will not be defeated in their campaign against water charge.’

They called for a unified, concerted campaign, emphasising unity as a crucial strength which the Government had attempted to dilute with the various concessions made in the latest water bill.

Pearse Doherty TD said that Sinn Fèin were proud to play their part in the campaign, but that it would be the citizens of Ireland who would deliver the knockout blow to the Government and Irish Water. “The only thing that will give this Government is their P45s” he said.

The proceedings were brought to a close ‘poet in residence’ Maximum Homosapien, who delivered another fantastic ode to modern Ireland and the water charges campaign.

Right2Water Donegal PRO Gary Doherty promised that the campaign would continue in the coming months.

“The organising committee will meet in the next week and decide where we go from here, but we will not rest until we have achieved our goal. In the meantime we would encourage as many people as possible to get involved with their local Right2Water groups.”

UP TO 5,000 PROTESTORS KEEP PRESSURE ON GOVERNMENT WITH WATER TAX RALLY was last modified: January 31st, 2015 by Stephen Maguire
FacebookTweetLinkedInPrint