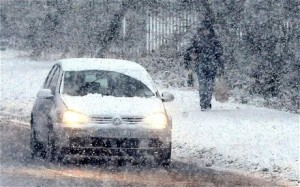 ANOTHER WEEK OF SLEET, SNOW AND PLUNGING TEMPERATURES FORECAST

Donegal woke up to a fresh blanket of snow this morning with another wintry week forecast by Met Eireann.

Motorists have been warned to take care with further wintry showers forecast for the coming days.

Further falls of sleet and snow are due throughout the week with heavy frosts and plunging night temperatures right up until Friday.

Heavy hail showers were followed by falls of snow overnight.

Gardai have warned motorists to take extra care after a number of minor crashes.

Two motorists had a lucky escape when their jeeps crashed outside Raphoe last night.

It is understood one of the drivers lost control on black ice, collided with the second vehicle and ended up on its roof in a field.

Both drivers were taken to Letterkenny General Hospital but their injuries are not understood to be serious.

The following is the Met Eireann forecast for the coming days.

Cold and frosty this morning, and remaining cold throughout the day with highest temperatures of only 3 to 5 degrees. Occasional wintry showers, especially over the west and north, but otherwise bright with good sunshine. Light to moderate northerly winds.

Cold and frosty again tonight with lowest temperatures of 0 to -3 degrees. Most of the night will be dry and clear but scattered wintry showers will continue to occur over more western counties.

The wintry showers will be more frequent in the west tomorrow and it will be a cloudier day overall. But otherwise cold again with highs of 3 or 4 degrees and light northerly winds.

Wednesday: Another cold, bright day with highest temperatures of 3 to 6 degrees in north-easterly breezes. Most places dry, but scattered wintry showers will affect eastern coastal counties during the morning /afternoon.

Thursday / Friday: Remaining cold, but largely dry and bright. Highs of 3 to 5 degrees with severe night-frosts.