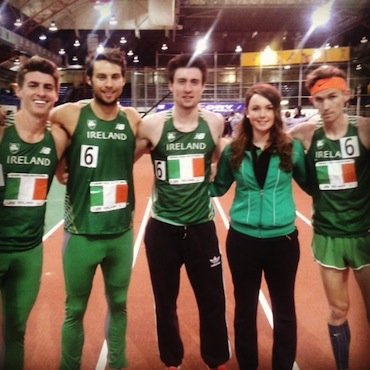 Pictured with the world record breaking Irish team last night at the Armory, New York is Monica O’Connor, Loughnagin who was there to cheer them on.
Declan Murray, Brian Gregan, Letterkenny’s own Mark English and Ciaran O Lionard.

But it wasn’t enough to gain a win at the Armory international.

They had to be content with finishing second to the USA however, who finished in a time of 9:19.93.

Declan Murray led the Irish out in the 1,200 meter race, before Brian Gregan handed over to Mark English after completing his 400 meter leg.

English brought Ireland right back into contention racing 1:46.59 for his 800 leg, inside English’s own Irish record set in Athlone last year.

The crowd where on their feet when Ciaran O’Lionard racing over 1,500 meters brought the Irish right into contention with an American team which included World champion Matthew Centrowitz.

The USA side where roared on by home support grab the win in 9:19:23 breaking the World record which the Irish were just inside, six seconds behind.

“I just wanted to us be competitive,” explained Ciaran O’Lionard afterwards. ”the guys did a great job to be so competitive against a really top American team”

“The USA team have had a couple of good outings this season and for most of us it’s our first race of the season and it proves Ireland are back.

“I just wanted to give us a great chance and set up O’Lionard for a big finish” explained Mark English who ran inside his old Irish record.

“I was happy individually with my performance to day, I was delighted for the lads,” added English. It’s on to the European indoor championships in Prague now.”