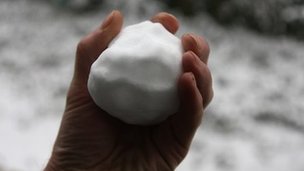 A woman with three children had a lucky escape after her car was set-upon by a gang of youths throwing snowballs with rocks in them.

The gang of youths filled snowballs with rocks and threw them at passing cars.

The terrifying incident happened in Letterkenny this afternoon.

The woman’s car was struck so hard that it was left with a dent.

The incident happened close to the roundabout at the entrance to the Donegal Creameries plant at Ballyraine.

The woman got out of the car but was then verbally abused by the gang of six teenagers.

The woman, who contacted Donegal Daily, said “I was so annoyed but I was so shocked when they then gave me a mouthful and told me where to go.

“There is a dent in my car and the three children were terrified. We all enjoy a bit of fun in the snow but putting rocks in snowfalls and firing them at passing cars is just so dangerous.”

The woman confirmed she has contacted the Gardai to make an official complaint.